Is funding for transparency, participation and accountability (TPA) decreasing? Who is funding TPA now? What specific issues and countries are they focusing on? I’ve been tracking analysis and speculation on these kinds of questions for years. I had a chance to really dig into the data earlier this year. Working together with a team from OTT Consulting, I undertook a landscape scan of funding to the field to inform the Hewlett Foundation’s TPA grantmaking strategy refresh process.

Some of the answers I found were unexpected or just not well-known. Funding in many TPA areas had increased from 2015 to 2019, contrary to what I had seen in some op-eds. Since other data wonks or TPA advocates might find this interesting, I’ve pulled together some charts that provide a sense of where funding is going or highlight less-well known information. These charts should be viewed as complementing the work already done by the Organisation for Economic Co-operation and Development Donor Assistance Committee (OECD DAC) on bilateral donors.

A quick note on the data

These charts are all based on the data from OECD DAC. A variety of donors report data to the DAC, including bilateral donors, multilateral organisations and multilateral development banks, as well as philanthropies and charities on their private development finance.

Most of these charts present data from 2019 (which was made available in 2021). Most data presented here is based on disbursements (rather than commitments) in million United States (US) dollars. Unless otherwise noted, aggregate figures of funding are for all funding reported, which includes multiple modalities (for example grants and loans). The OECD DAC Network on Governance recently published an accounting of trends in bilateral funding specifically.

The OECD DAC’s data is one of the most comprehensive and rigorous sources on international funding, but even then, the data may have errors due to incorrect reporting to sector codes or particular markers. Not all funders report to the OECD DAC either.

This data was originally analysed for a landscape scan prepared by OTT Consulting for Hewlett Foundation. It accompanies a shorter brief tailored to funders.

1.  Distribution of international funding to government and civil society across regions in 2019

Sub-Saharan Africa was the region that received the most international funding for government and civil society as reported to the OECD DAC, followed by South and Central Asia, Far East Asia and South America. The majority of funding to sub-Saharan Africa and South and Central Asia was made through grants, while Far East Asia and South America received more funding through other types of official flows.

2.  International funding to government and civil society in sub-Saharan Africa in 2019

There is a big disparity in funding to the government and civil society sector across sub-Saharan Africa. The reported levels of funding to some countries are significantly higher than others. Th­e four countries with the highest level of reported funds to the government and civil society sector (over US $200 million each) were: Kenya, Nigeria, Ethiopia and Niger. A further six countries received over US $150 million. Th­e eight countries that received the least funding (less than US $5 million each) were: Equatorial Guinea, Mauritius, Botswana, São Tomé and Príncipe, Eritrea, Eswatini and the Comoros. 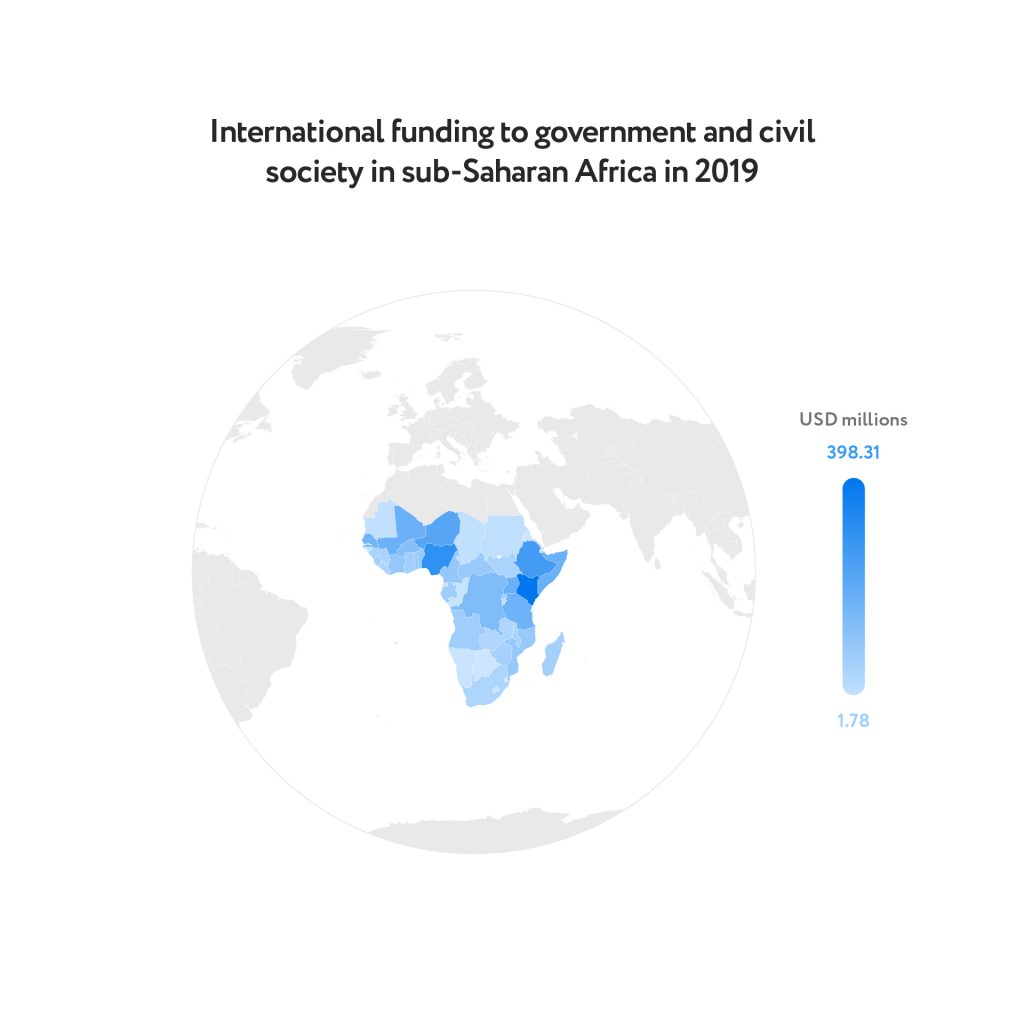 3. International funding to government and civil society in South America in 2019

The four countries with the highest level of reported funds to the government and civil society sector (over US $500 million each) were: Mexico, Ecuador, Colombia and Argentina. ­The four countries that received the least (less than US $10 million) were: Grenada, Belize, Suriname and Guyana.

Looking at the ratio of population to funding, Costa Rica and El Salvador received the most on a per person basis and Venezuela and Brazil the least. 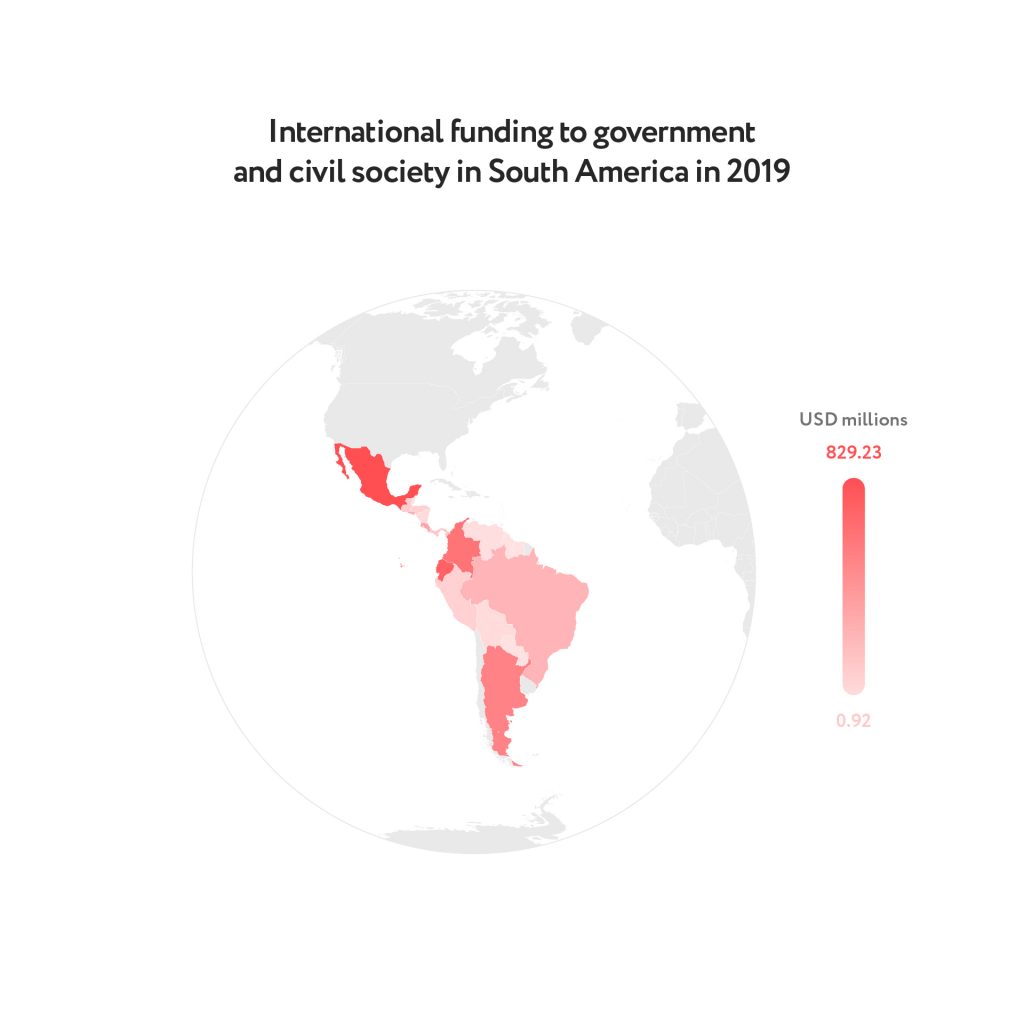 4. Funding to government and civil society sub-areas globally from 2015-2019

Most of the sub-areas under the government and civil society sector code received more funding globally in 2019 compared to 2015. Domestic resource mobilisation and anti-corruption in particular saw greatly increased funding – with funding to anti-corruption organisations and institutions more or less doubling. Sub-areas that decreased include: legislature and political parties; elections; and legal and judicial development. 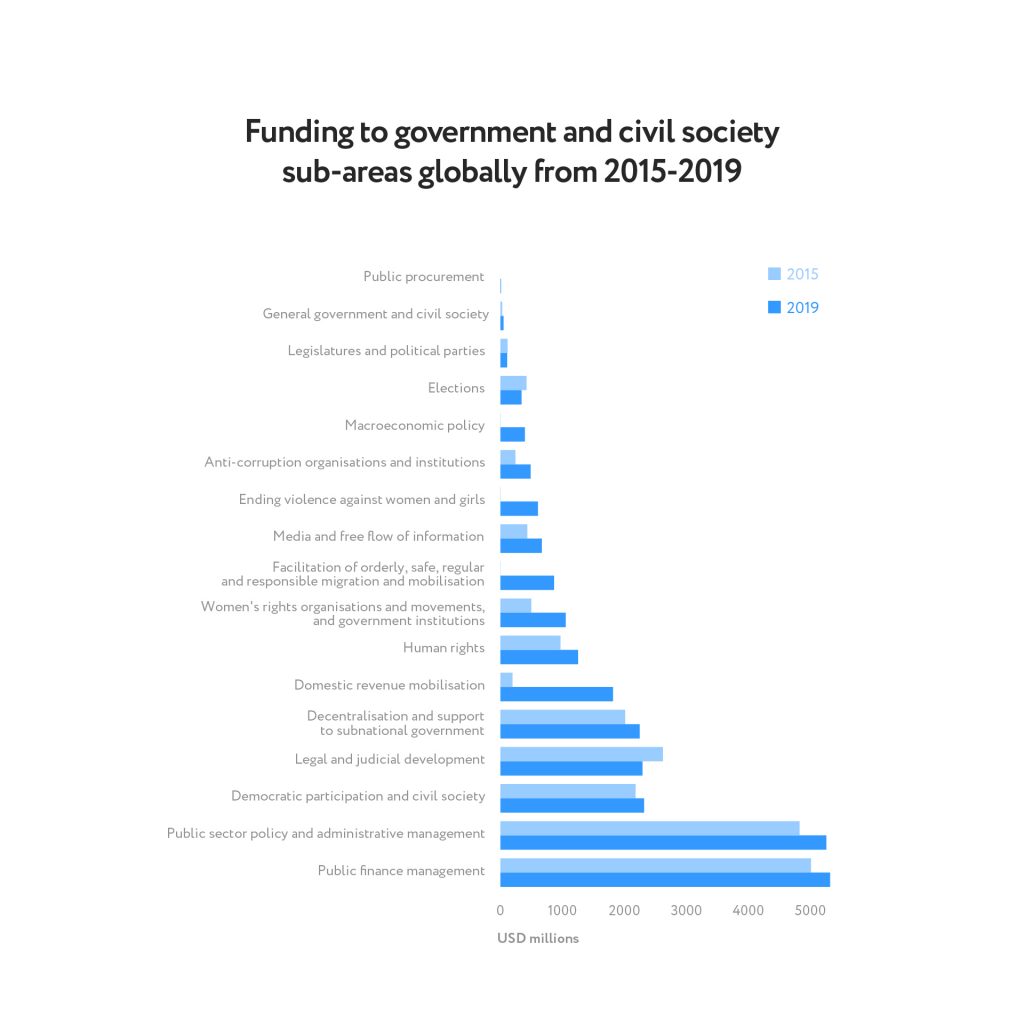 As background, we wanted to get a sense of gender mainstreaming in the government and civil society sub-areas (meaning integration of gender into funding). The gender marker gives a rating as to whether a project includes gender equality as a principal (marked as 2), significant objective (marked as 1), or not targeted (marked as 0). We excluded two government and civil sector sub areas (ending violence against women and women’s rights organisations) that provide for women-specific programming to ascertain the extent of gender mainstreaming in the other sub-areas. (Note that women’s rights organisations saw more funding in 2019 compared to 2015 globally and ending violence against women code began in 2015 for 2016 data.) 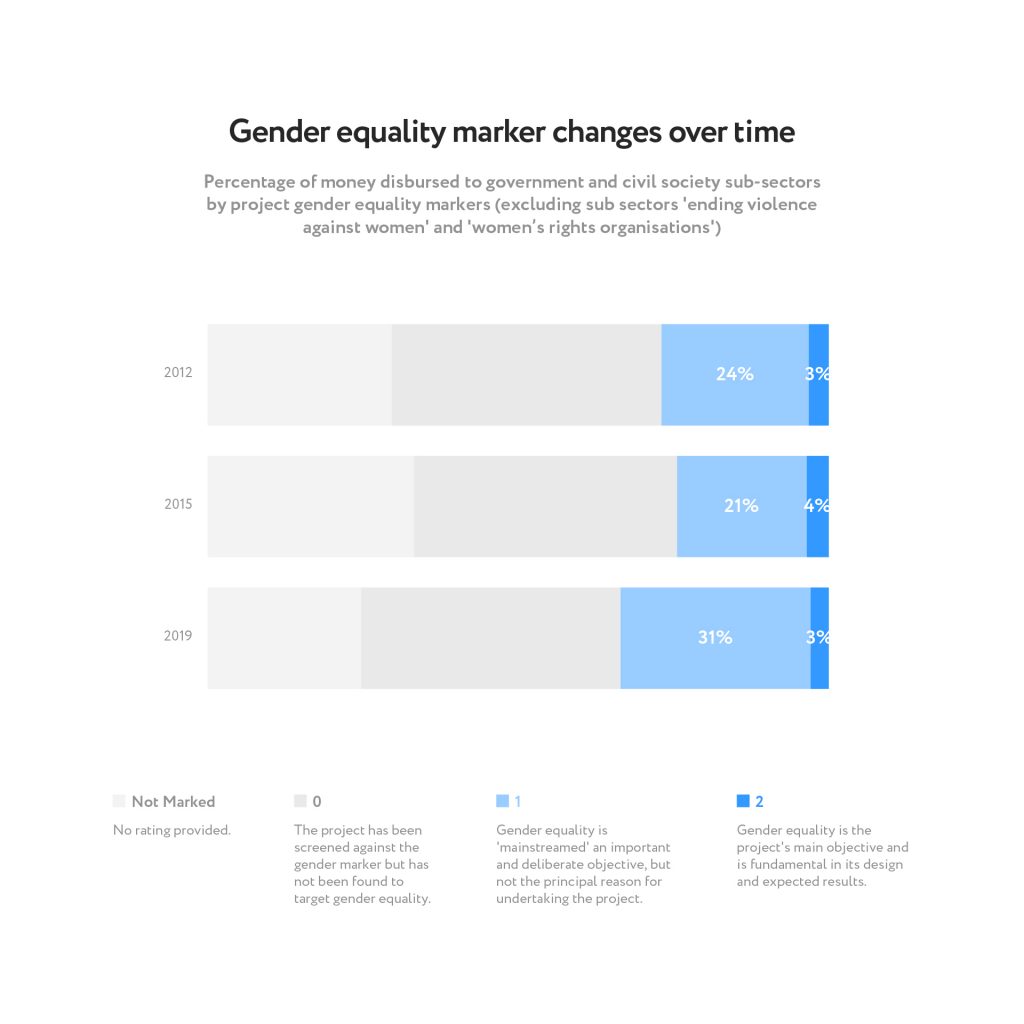 In 2019, only US $9.3 million in funding was reported to the Public Procurement code of the OECD DAC’s Creditor Reporting System. This figure seems too low. There are programmes that receive funding for public procurement not reported through this code, and other projects mentioning procurement were reported under different codes (like public financial management). Given the importance of procurement in COVID-19, hopefully donors will look into their reporting to this code. 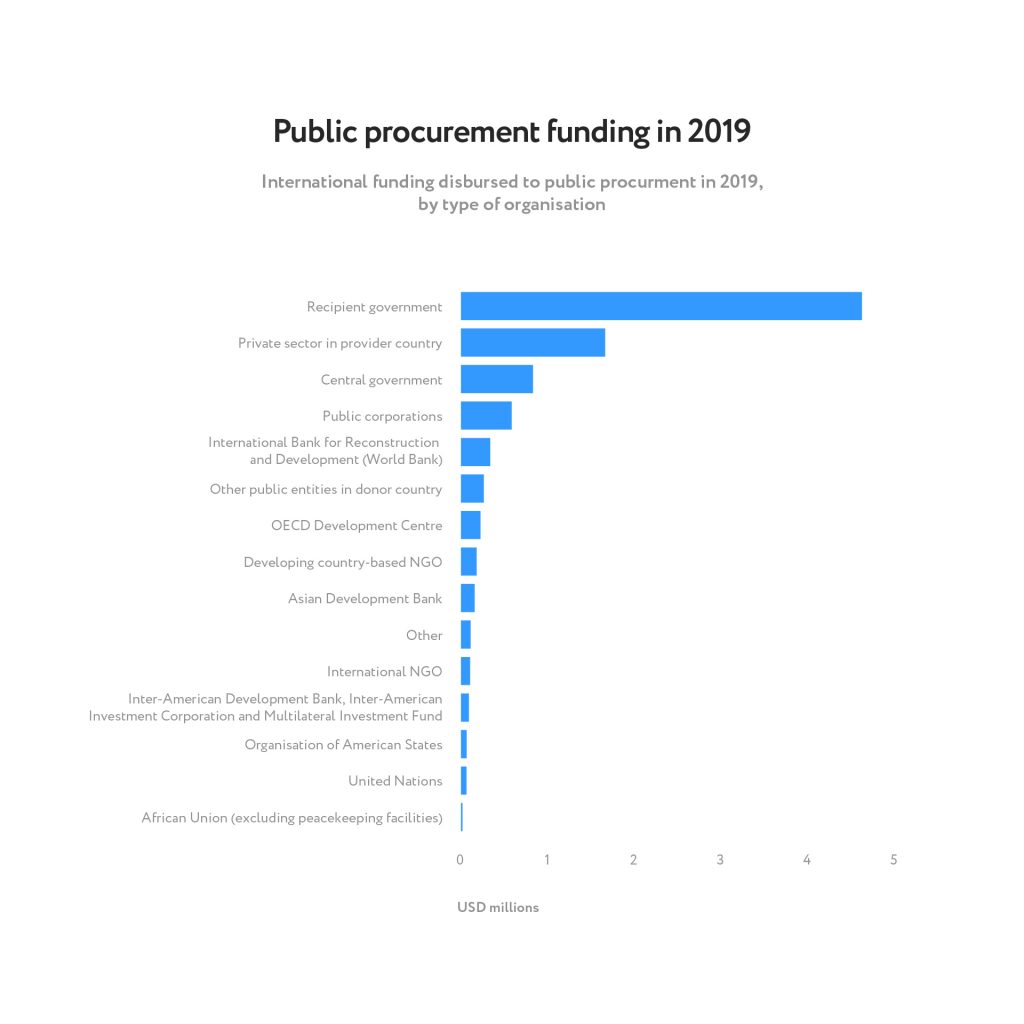 7. Funding to government and civil society through domestic, donor-country and international NGOs from 2015-2019

As a percentage of funding through NGOs, developing-country NGOs received 13% in 2015 and 15% in 2019. The trend is in a positive direction but seems minimal and is still at a low level. Thus far, therefore, rhetoric about ‘localising’ and ‘decolonising’ aid had not translated to disbursements. 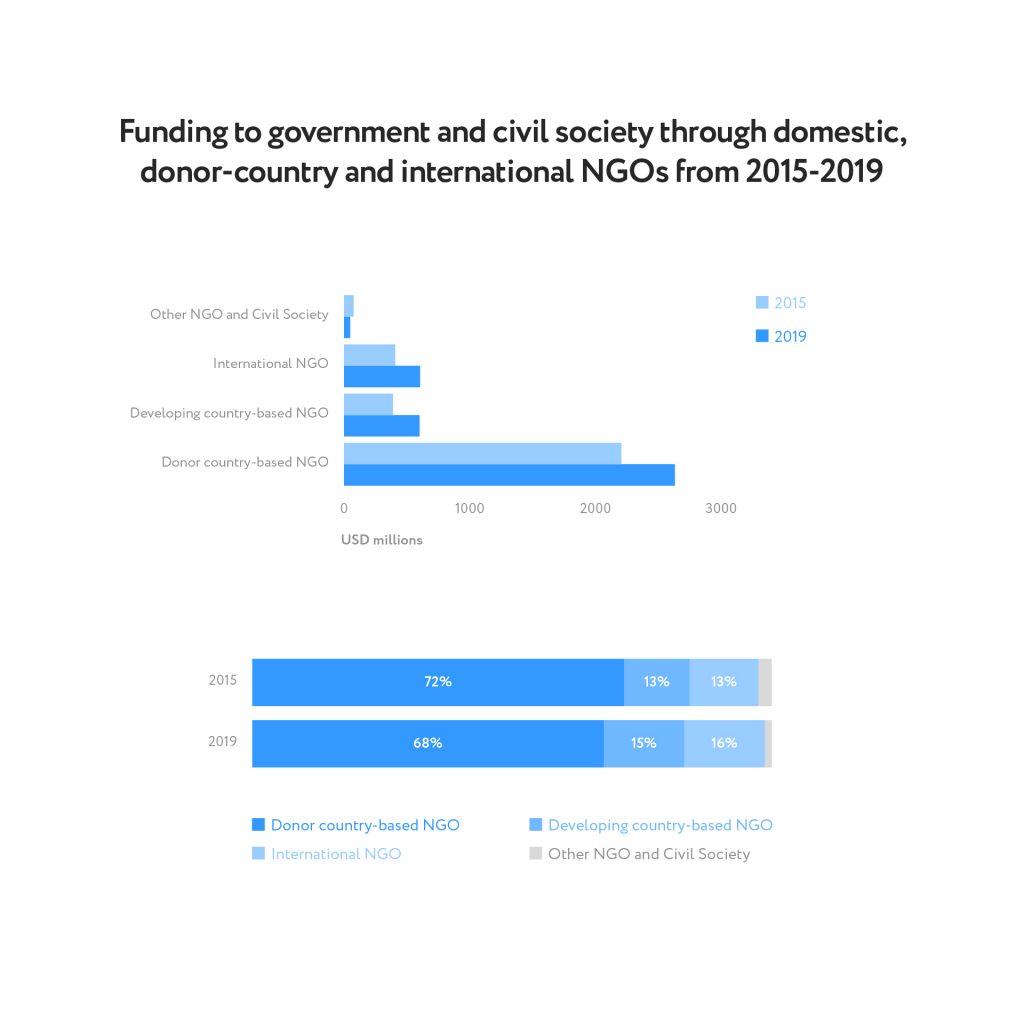 COVID-19 has shown the importance of fiscal and monetary policies. While 2020 data is not yet available, in 2019, Indonesia stood out as the country marked as benefitting from the most funding in four related sub-areas: PFM, DRM, monetary institutions and macroeconomic policy (as reported to the OECD DAC by all funders).

Looking specifically at private development funders, the top-named country recipients of this kind of funding were Nigeria (US $3.2 million), India (US $2.5 million) and Mexico (US $1.8 million) (not shown in this chart). 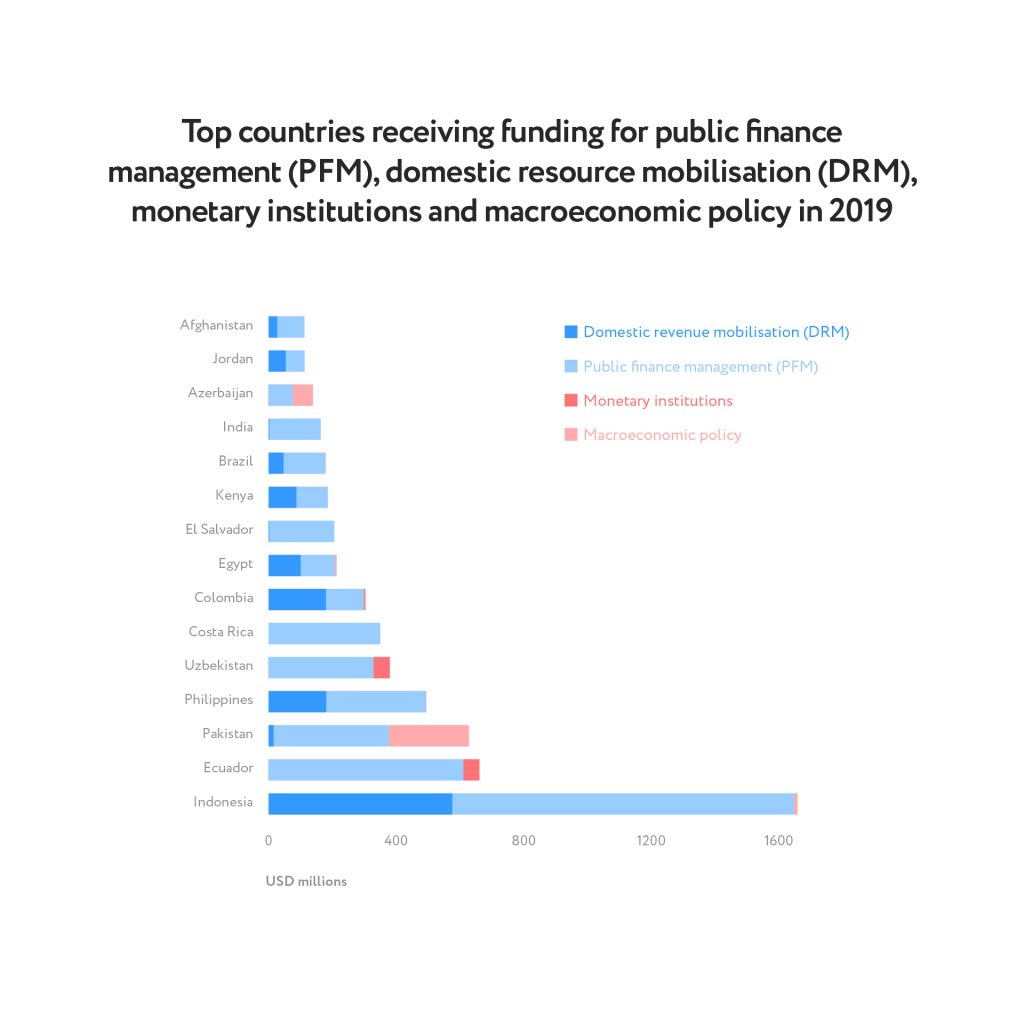 9. The 10 biggest funders of government and civil society in South America in 2019

The top philanthropic funder to this sector and region in 2019 was BBVA Microfinance Foundation at US $41 million, followed by the Ford Foundation at over US $14 million. 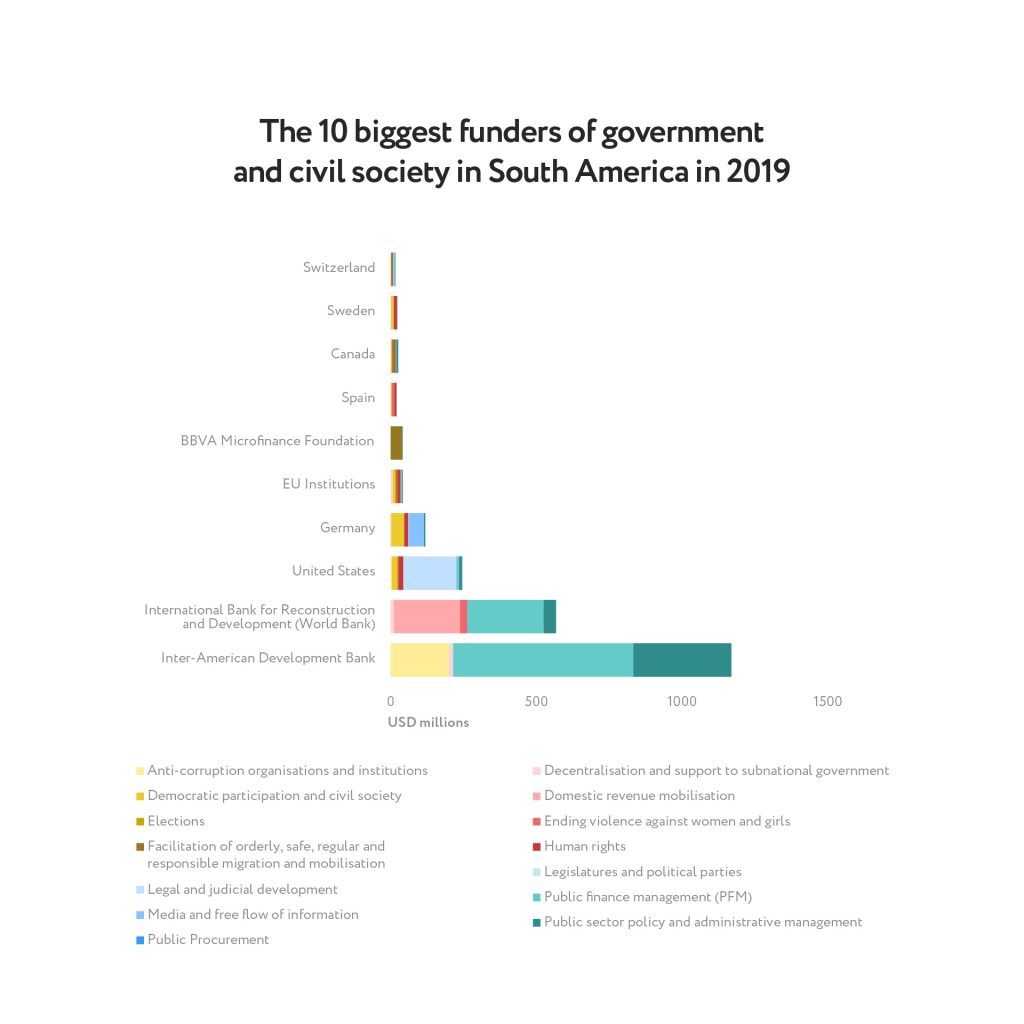 10. Top 10 funders to government and civil society in sub-Saharan Africa in 2019

In 2019, the funder with the most disbursements to the government and civil society sector in sub-Saharan Africa was the International Development Association of the World Bank at over US $1.4 billion. European Union institutions disbursed over US $400 million to the sector, while the US, Germany and the UK all disbursed over US $300 million.

The top philanthropic funder (that reports to the OECD DAC) to this region and sector was the Ford Foundation at over US $28 million. 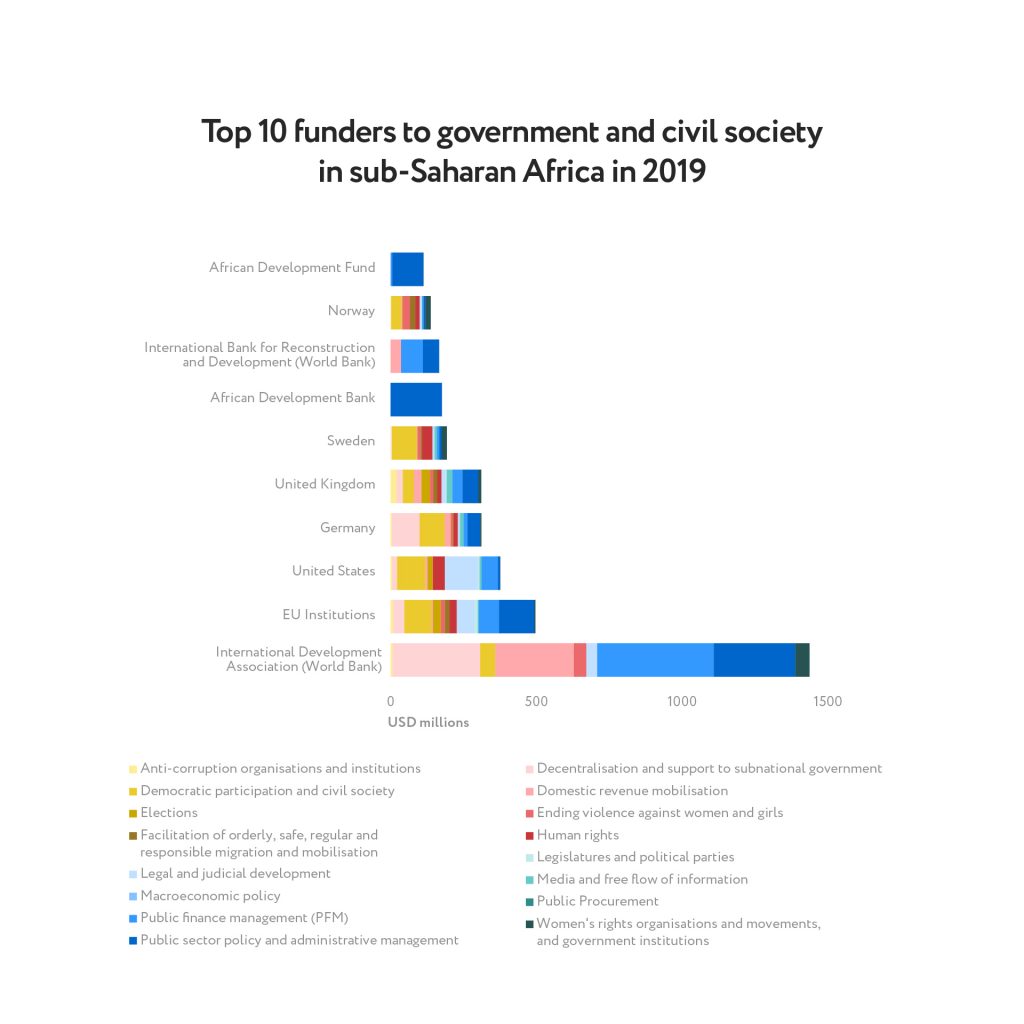 Read the accompanying brief: International funding for transparency, participation and accountability and COVID-19: trends and implications for funders.

New Right think tanks in the US

The expanding population of think tanks in the United States contains a new, more politically committed, group. This comparatively young group is less driven by the goal of basing public...

I noticed a pattern among the end-of-year reflections of my peers: 2022 was bittersweet. It was a great year professionally for many, including OTT (see the end of the...