Current macroeconomic issues include economic recovery from the COVID-19 pandemic, the green economy, and infrastructure investments.

Think tanks are almost unknown to the Italian public, which is partly due to historical factors and partly because Italian policymakers have little track record of relying on think tanks for policy advice.

Mirroring an evolving political landscape, well-established think tanks have had to adjust to demands from a new generation of politicians.

With limited government resources allocated to funding research, 40% of think tanks rely on funding from the private sector to supplement their revenue streams.

A few Italian think tanks have become recognised internationally for their role convening high-profile events, such as the annual Davos-like forum jointly hosted by Europe House – Ambrosetti and the ASPEN Institute.

Current macroeconomic issues include economic recovery from the COVID-19 pandemic, the green economy, and infrastructure investments all of which have received recent  investment from the European Union. In recent years, the Italian government system has been transitioning to a modern knowledge-driven system, with greater investment in universities and think tanks in recent years.

The think tank landscape in Italy has been in a fluid state as think tanks have had to adjust to the changing political, cultural, economic and institutional context. Italian think tanks date back to the end of the Cold War, when political leaders began to develop an appetite for research evidence and expand their networks to include policy actors that could bring them legitimacy.

While decision-making processes in the early 1990s were quite opaque, like the German think tank ecosystem, with policy research foundations connected to political parties, there were a few that had emerged in Italy much earlier that were more characteristic of the Anglo-Saxon tradition. The two primary players are the Istituto Affari Internazionali (IAI), established in 1965, and the Institute for International Political Studies (ISPI), established in 1934. These have been more connected to the foreign policy bureaucracy.

Today another evolution is underway in Italy, with the think tank ecosystem pursuing an approach similar to the US and UK model, focused on leveraging policy networks, and coalitions to put forward policy recommendations and influence policy decisions.

A new generation of politicians are focused on consensus building yet tend to be weak on policy knowledge, making them reliant on external experts. This provides an opportunity for well-established think tanks with extensive connections to provide expert advice on priority issues.

In recent years, thematically focused think tanks have continued to emerge on the scene as experts on topics ranging from environmental issues, innovation and technology, and cybersecurity. While approximately 15 think tanks continue to be affiliated with political parties/leaders, these think tanks are much weaker as they have not evolved to the new political realities and many of this type have not survived.

Notwithstanding this 30-year history, think tanks have had little visibility and have been  almost unknown to the Italian public. Few think tanks have a strong media presence, and there are hardly any think tanks informing the public debate.

Aside from the top foreign policy think tanks, communicating research findings and making them relevant to current public discourse has not been a focus for most Italian think tanks. The ISPI is one exception as they have strong media presence; for example, they have provided the strongest coverage of the Ukrainian crisis on national television broadcasting.

In general, the Italian think tank sector is not as well developed in number, size and impact as compared to other European countries and the US. Larger think tanks have between 40–50 staff while most tend to be much smaller, aligning more with the European think tank standard as opposed to typically large-sized US think tanks.

The two key players in the Italian foreign policy think tank landscape are the IAI (since 1965) in Rome and the ISPI (since 1934) in Milan. A unique player is the Italian branch of the Aspen Institute (Washington, DC-based think tank), established in 1984 with a focus on transatlantic relations. These three larger think tanks are non-partisan and work horizontally across the political spectrum with a broad cross-section of Italian institutions.

Other, smaller, thematic-focused think tanks mainly operate in Rome, Milan and Turin and new think tanks emerging on the scene are positioning themselves as experts on thematic priorities such as the environment, innovation and technology, cybersecurity etc.

These thematic-interest think tanks are also non-partisan and have no specific ideological position. Interviewees shared some examples of younger think tanks such as Tortuga, a network of former students from Bocconi University in Milan (however no further information on this network was found). Another think tank that was recently founded in Rome is ECCO, the first environmental think tank in Italy focused exclusively on climate change and climate policy.

While the funding environment has seen marginal improvements in recent years, the think tank ecosystem has been stifled by a lack of government investment in knowledge and evidence to inform strategic thinking over the long term and overall weakness in the economic system. Discrete pockets of government funding mainly focus on project support, and include Cassa Depositi e Prestiti,  a government trust that invests in policy research on government priority issues. 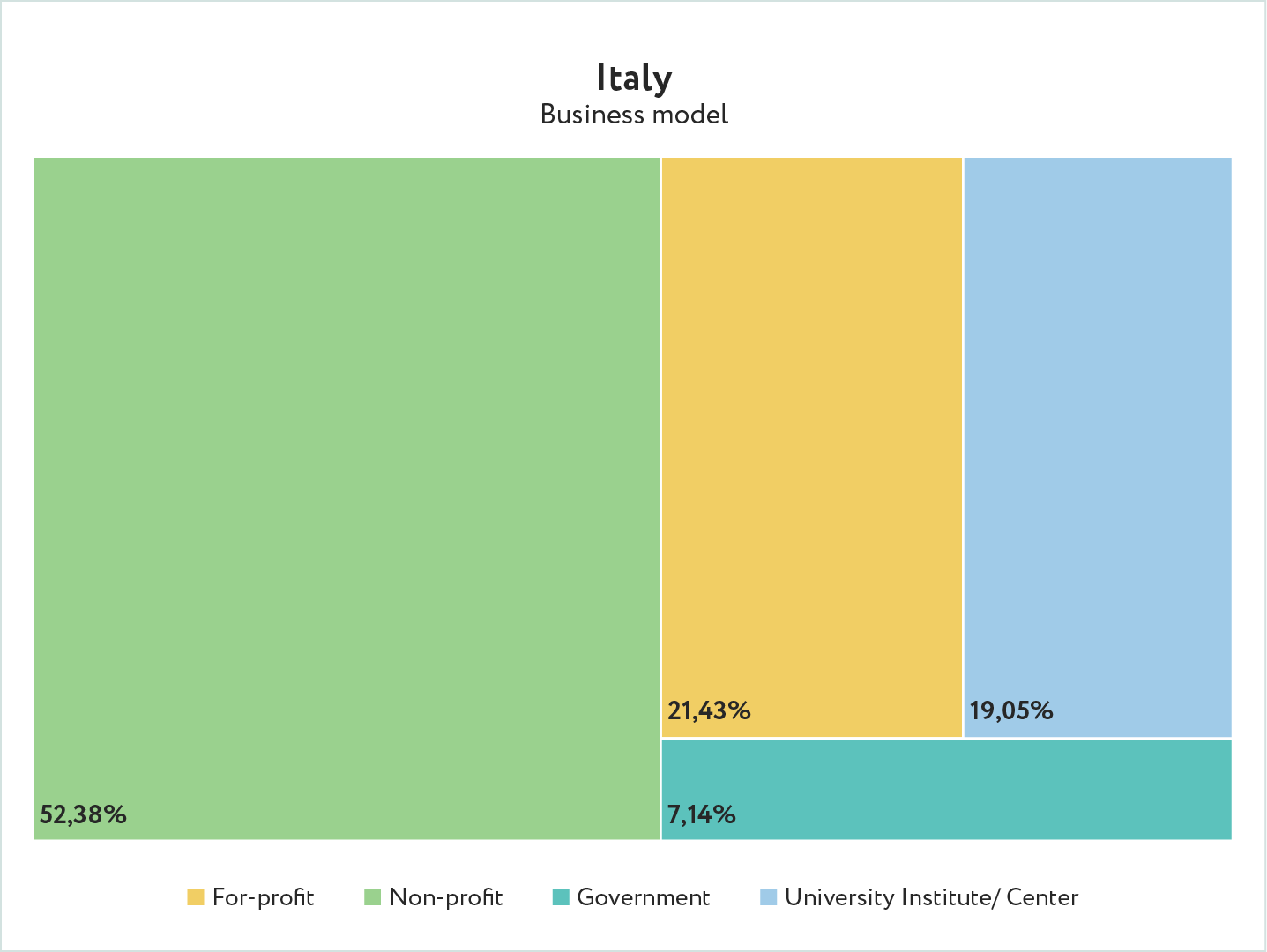 However, with limited government resources allocated to funding research, 40% of think tanks rely on funding from the private sector to supplement their revenue streams. Banks and technology companies are industries that are known to support think tank work through commissioning research and/or inviting think tanks to convene and host events that connect the private sector to political actors, civil society and the public.

The Bruno Leonie Institute, one of the highest regarded economic think tanks, receives a substantial amount of funding from private funders (20–30 companies). Companies use Italian think tanks to gain visibility on a particular issue or with constituents such as political advisers. For example, VodaPhone commissions research from prominent university think tanks and has provided modest funding (EUR 20,000–30,000) to other think tanks to organise conferences or meetings that enable them to establish connections with policy advisers and prominent Italian politicians. 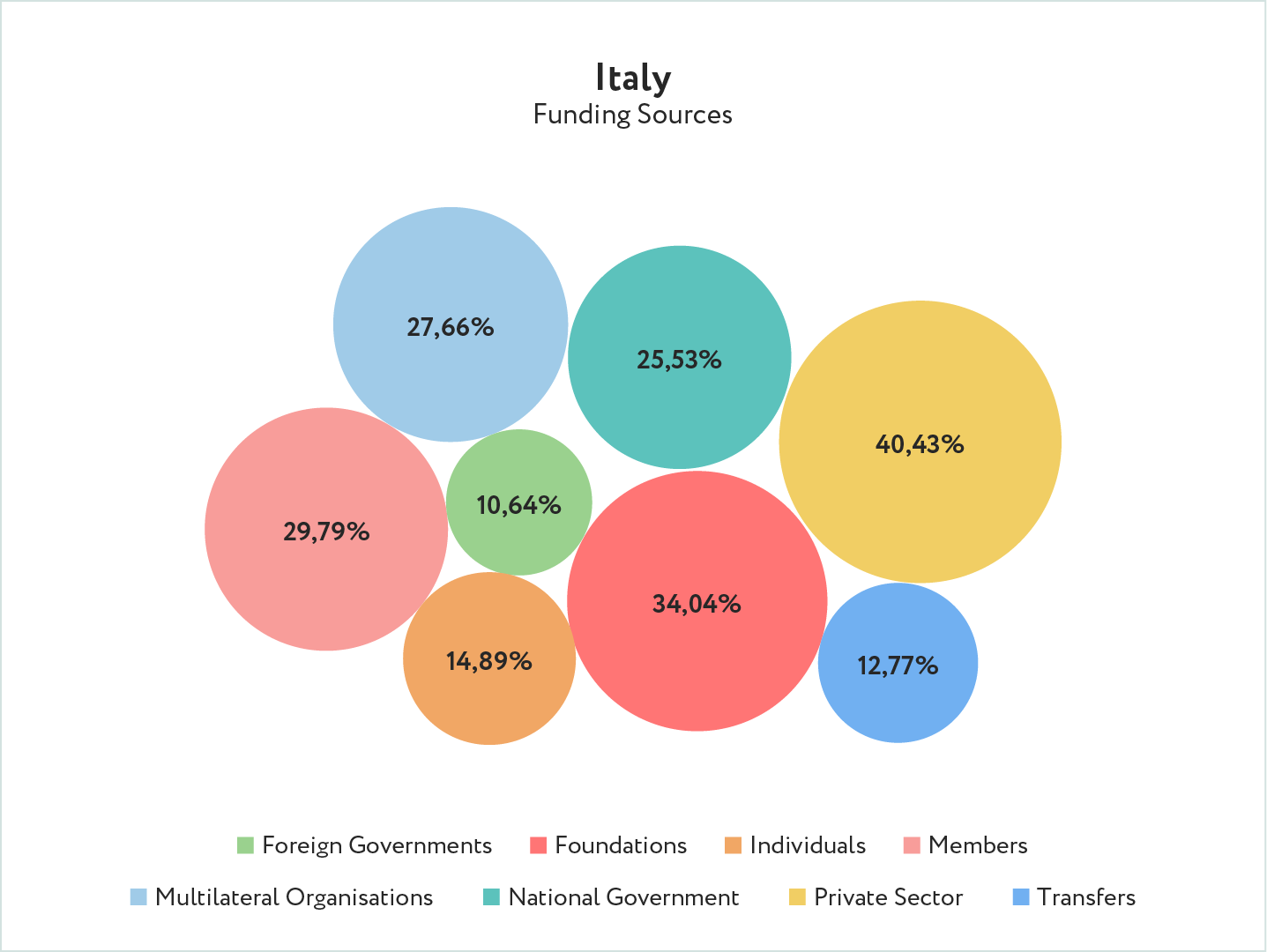 With no substantial philanthropy culture in Italy, only think tanks with international outreach have been successful in gaining funding from multilateral organisations, foreign governments and philanthropic foundations. The IAI, ISPI and Aspen Institute (an offshoot of the global ASPEN Institute), among a few others, are well connected at the international level and have extensive European networks. On the other hand, many think tanks are well recognised domestically but lack international networks, and rely on domestic sources of funding.

While evidence-informed policymaking using independent research has not historically been part of the Italian tradition, in recent years the demand side has improved.

There have been an increasing number of requests from government institutions for data and policy recommendations. It is becoming more the rule rather than the exception and may be due to think tanks like the IAI having a strong advocacy side to communicate, share and promote research results and engage with a variety of actors through the media and directly with decision-makers.

This active policy engagement by think tanks means that think tank research is slowly beginning to inform public debate however it will be a long road for think tanks to become a visible actor contributing to public discourse.

However, few think tanks have a strong media presence, and there are hardly any think tanks working on public opinion or informing public debate. Aside from the top foreign policy think tanks, communicating research findings and making them relevant to current public discourse has not been a focus for most Italian think tanks.

While there is no strong precedent of a revolving-door culture in Italy compared to the US, there is implicit flexibility in the system that encourages diversity in professional experiences and enables secondments and other mechanisms for movement of professionals in the policy space.

Many think tankers have worked in the diplomatic service or in posts in the EU and some think tank leaders are ex-ambassadors or former special advisers to the president of the republic, although this is less common than in other markets.

It is more common for movement to take place from government into think tanks than the other way around. Sometimes former diplomats are invited to join the board of governance of think tanks, and on rare occasions such as when Italy hosted the G20 in 2019, the prime minister’s office may invite think tank experts to join as advisers on specific issues including food security, health and energy. However, it is much less common for think tank experts to be invited to become advisers to the prime minister than it would be in France, for example.

A few Italian think tanks have become recognised internationally and across Italy for their role convening high profile events. For example the annual Davos-like forum jointly hosted by Europe House – Ambrosetti and the ASPEN Institute is considered by many as the most prestigious event that is traditionally held in Cernobbio, and brings together an array of speakers of the highest level from the world of politics, academia, government and business, from across the globe.

La Terza, while not a think tank per se, is more of a publishing house that has significant political influence through its role in organising the global health festival and the economy festival in Trento in collaboration with the Gates Foundation, Global Fund and GAVI. The IAI organises regular high-level multilateral forums and the 2022 event will focus on pandemic recovery in the context of the New Development Framework of the European Commission.

In terms of networks of influence, the IAI and ISPI have solid foreign policy influence and are regularly invited to participate in parliamentary committees and debates on foreign policy priorities. In the economics field, the Bruno Leonie Institute is well connected with the Ministry of Economy and Finance and is seen as a go-to for economic data and analysis, as well as policy options.

Previous
Part 5 of  Think Tank Landscape Scan 2022
Next
About the authors: