Are South Asian think tanks ready for some fund-amental changes?

Think tanks around the world, including a few in South Asia, are facing a ticking time bomb: a funding crisis. Although this is a major challenge, they might be able to defuse this kind of crisis by sprinkling some “innovative” dust on.

The amount, span and frequency of funding is often a result of the value and the history a think tank brings to the table. In a world where funders look for tangible and clear outputs, the “doer” tag is more than just an added bonus. Organisations working in the space of activism can probably grab a slice of the funds much faster than others, but not all think tanks sport the halo of activism.

What happens then to these policy and advocacy bodies and organisations which need to keep a steady flow of funds? Well, they need to get off the beaten track and explore new avenues. Why? Here are a few reasons:

In the current scenario, most think tanks, especially those in South Asia, source their funds from donor agencies and governments at the state and national levels (funds are usually awarded for individual projects or studies). However, think tanks like the Centre for Policy Dialogue (CPD) in Bangladesh choose differently. According to Prof. Rahman, former  Executive Director of CPD and current Distinguished Fellow at CPD,

CPD avoids taking funds to pursue research work from organisations such as the World Bank and the IMF, who have an important say in reform measures and policies in Bangladesh. This is meant to avoid conflicts of interest which may arise in undertaking assessments of those reforms. The need for funding also becomes imperative to plan a research agenda or the growth of a think tank.

In an interview with OTT, Suresh Raghavan, ex-Director of Bangalore-based Public Affairs Centre (PAC), said his first challenge (as an Executive Director) was to,

Raise the funds necessary to re-configure PAC as an organisation that meant business, not only in terms of its research approaches and unique competencies, but also with regard to altering its research path to include key action elements so that on-the-ground changes were visible.

Should think thanks rethink their funding structures?

Dr Khalida Ghaus, Managing Director for Social Policy and Development Centre (SPDC), suggests that think tanks need to work closely with the government, both at the federal and the provincial levels. The other option she suggests is to work with parliamentary committees at the federal and provincial levels. These committees have research funding available for specific topics like the SDGs and the MDGs. She says,

It is important to work with various parliamentary committees and task forces in identifying research and capacity building areas.

The downside of this option could be that by having research commissioned and funded by a government, a think tank might have to forego their areas of interest for some time.

The Indian government and industry have been reluctant to financially support think tanks. In a 2013 editorial piece in the Business Standard, Anshu Bharadwaj, ED of CSTEP, wrote about the lack of government support:

Seeking government support is hard for most think tanks for several reasons. First, there is a lack of confidence in the abilities of think tanks to make high-quality and relevant contributions. Second, there is often mistrust about their ideology and agenda. Finally, even if the government is convinced to engage with a think tank, complicated rules and procedures come in the way of providing the desired level of financial support.

Funds are required not just for running projects, but also for core funding activities. So, what if think tanks take a page out of the book of corporations or assess some unconventional routes to funding?

This could be viable option, but banks will need to know how the funds will be used and channelled. They will also need proof that the organisation has the resources to pay back the debt on time, including the interest.

Banks will probably address this request with caution and scepticism, but agreeing to periodical reviews of lending norms to accommodate loan requirements can make this a feasible funding option for think tanks.

Engagement of banks has been low so far. However, the banking policies can be made more flexible to co-opt self-help group funding or to make funding project based.

Since banks do not offer unsecured loans, the need to have a collateral and interest rates can weigh heavily on think tanks. Nevertheless, it is an option worth exploring.

As a financial vehicle, VC funding can be used to scale up projects. The selling pitch here should be the social return on investment (RoI) for venture capitalists, rather than monetary return.

Think tanks are inherently structured to provide non-partisan and independent analyses on matters of public concern, so their RoI will be expressed through policy reform, research analysis or knowledge creation for the benefit of society. Since a think tank is not a commercial enterprise and does not give commercial returns to investors, it is a niche market for an investor.

There are organisations who see engaging with social VCs as an option. However, to be successful in securing funding from this source, a think tank has to show results of its policies and costs on the ground.

The more and more micro it gets, the more and more specific funding gets. And if there’s a feedback mechanism to the investors specifying how much money has been deployed or what the progress on the ground has been, it will increase credibility, thereby helping raise more money.

The mind-set of a fundraiser in the think tank community will probably have to go through a tectonic shift to adopt this route. It is one worth exploring though as it provides relatively easy access to funds and does not need any collaterals.

Nowadays, individuals are coming together to contribute to developmental issues, hence making crowdfunding a rather prominent source of funding for think tanks.

There are concerns with this approach as well, of course. For starters, one has to acknowledge every funder. Furthermore, there is the challenge of winning over the general public and convincing them to buy into the idea that is being proposed. There is also concern about the “reach.” Is the money one is donating going to the right project or the cause it is meant for?

To address these challenges, think tanks have to improve their communications and lend greater transparency to show the output.

Crowdfunding campaigns, if ran successfully, can bring in great dividends. A sound reasoning and powerful messaging for the campaign can draw a lot of attention. This kind of funding can work wonders for projects, though they may not be the better option for core funding since overhead costs, which are fixed, are often 40-50% of total costs.

On April 2014, the Government of India made it mandatory for large companies to donate 2% of their yearly profits towards a social cause. Most think tanks in India are yet to capitalise on this.

However, there are some organisations which have taken advantage of this opportunity. One of these is the National Council of Applied Economic Research (NCAER), a think tank based in New Delhi. They received INR 50 crore (about USD$ 8.08 million) from Nandan Nilekani, an entrepreneur and co-founder of Infosys, and his wife Rohini Nilekani, a philanthropist. This might not have been a part of their CSR policy, but it is surely an example of how to approach and receive funds from individuals.

Mr Suresh Raghavan, ex-Director of PAC, also finds the role of philanthropists to be very important for a think tank’s sustainability:

These are people who have seen the world, have worked in it, generated enough wealth and now seek other people to reinforce some of their findings regarding the betterment of the world or whatever objectives think tanks have which match their view of the world.

Our organisation is very cautious about receiving funds from the private sector as it often puts under scrutiny the business practices pursued by the corporate houses. There is a perceived apprehension that their support could influence CPD’s voice if a transactional relationship is established with such entities. 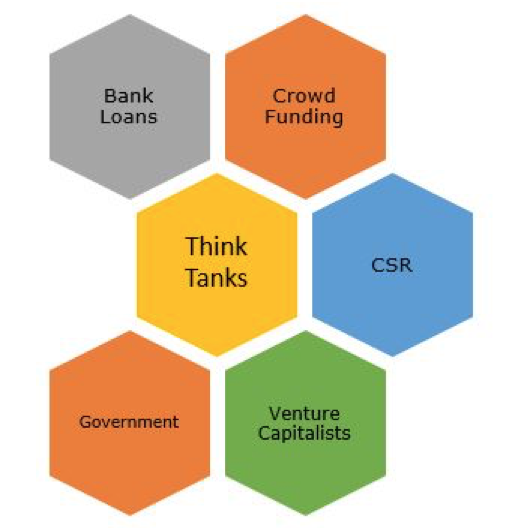 We could add to this list another couple of options:

What is the way forward?

The world is waking up to impact funding steadily, but slowly. Funding, by itself, needs to be better understood, and so does fundraising.

The journey to being “innovative” starts with the think tank community working on tapping new sources of funding.

A step towards change can be to opt for a hybrid funding model. For instance, it could be a mix of crowdfunding and traditional fundraising that the policy and advocacy bodies have been exploring so far.

Annapoorna Ravichander:  Executive director of the Public Affairs Foundation (PAF) in Bengaluru, India, and On Think Tanks editor at large for South Asia.

New Right think tanks in the US

The expanding population of think tanks in the United States contains a new, more politically committed, group. This comparatively young group is less driven by the goal of basing public...

I noticed a pattern among the end-of-year reflections of my peers: 2022 was bittersweet. It was a great year professionally for many, including OTT (see the end of the...