Drafting and validating your research agenda

Once one has defined the main components of the agenda, analysed the context, and framed the agenda, the challenge is: how do we actually go about implementing it? How do we collect information and knowledge to create a proper analysis of the context so that we can keep policy influence in the loop? Also, how do we receive and process inputs from both internal and external stakeholders?

The process of developing a policy relevant research agenda is an endeavor that requires both internal organisation and planning and external engagement with others who are key for its work. Without connecting our initial ideas and interests with the opinions and needs of others, the research agenda might become only a wish-list, disconnected from reality, lacking social and political relevance. The figure below summarises the key aspects of this process that will be detailed in the following subsections.

The cycle of developing a research agenda benefits from four general steps: 1) an internal process of brainstorming and discussions, 2) the engagement with relevant stakeholders 3) the inclusion and arbitrage of the suggestions received and 4) communicating the agenda. 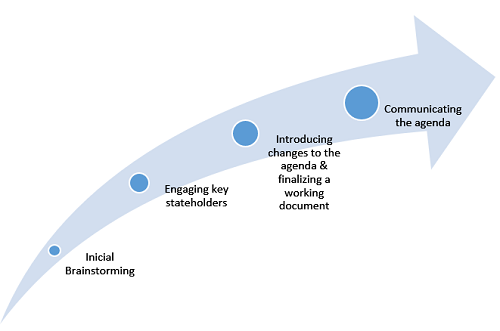 The process of internal discussion might occur at two different levels: within each team and also institutionally, including the board. Depending on each think tank’s functioning it will be important to decide on how these levels interact but it is important to maintain an alignment between the board and the staff. Furthermore, it will be ideal to identify key spaces already institutionalised in the think tank that can also be used to discuss the research agenda, such as the annual planning process so as not to demand too much extra energy from the organisation and its staff.

Deciding on levels and methods of engagement with stakeholders

Within the internal discussion, there must be an agreement about which other external stakeholders should also be engaged, including how to do it. It is advisable that various staff members are involved in defining this (though different areas could make different decisions), given that each one might have diverse expertise and connections with key stakeholders.

Possible stakeholders include other researchers and experts, policymakers, and representatives of civil society, among others. But beyond their nominal labels, what is critical is to understand the roles they play in a policy process and what research can bring into their table. Generally, we can categorise the different stakeholders in four groups: decision-makers, advisors, external proponents or supporters, and veto players.

But before approaching some of the most critical stakeholders about your research topics, it is important to also clarify, within the think tank, what level of engagement is desired and what is the objective of the engagement. Do you want to just gain an understanding of their priorities? Do you want to develop partnerships? What can the stakeholders expect from relating to you? Based on the work of Van de Ven on engaged scholarship, here we present four levels of engagement as an initial guideline:

The process of validating your research agenda can also benefit from a reflection on the different approaches that can be taken to receive the other’s comments; that is, the method of engagement, which should also be aligned with the level of engagement that has been chosen.

Previous
Part 6 of  Doing policy relevant research
Next
About the author:

This article was originally published by Transforming Evidence and can be viewed here. Interviews with those working on knowledge translation in the Global South...

Knowledge translation in the Global South: A language perspective

Anywhere in the world, knowledge translation (KT) is facilitated through a process of communicating messages to an audience, who will ultimately use that information to...

As a growing multi-disciplinary field, evidence-informed decision-making (EIDM) needs to draw out its unique qualities, irrespective of the perspectives from which they...

Are greater diversity, participation, and inclusivity compatible with greater impact?

Words have meaning beyond their definitions The public sphere today is terminally fragmented. Gone are the days when the debate focused on what to do based on the facts...

Democratising research for progressive change: The Centre’s experience in Malaysia

The terms that govern Malaysia’s public discourse have shifted tremendously in the last couple of decades. Thanks in part to the expansion of the third sector, NGOs,...