By  Annapoorna Ravichander
1 tweet
Previous
Part 4 of  Indian think tanks: a view on their journey
Next

Although most think tanks in India claim to be non-partisan, many are working as national foundations or trusts in the name of national leaders, ostensibly to consolidate their legacy and to promote their vision of India through research or by promoting scholarships for higher education.

Likewise, many think tanks in India engage with universities in various capacities. An understanding of this partnership can be summarised as:

According to Diane Stone + think tanks can be classified into the following typologies: as independent civil society think tanks established as non-profit organisations; as policy research institutes located within or affiliated with a university; as state sponsored or government think tanks; as corporate created or business affiliated think tanks; and, as political party (or candidate) think tanks (refer to Figure 1). Nevertheless, I will argue that Indian think tanks are a separate species when compared to their global counterparts. International classifications, like Stone’s, rarely hold true in the Indian context. Since the nature of think tanks differ from each other, they do not fit into any one category. Hence, they can also be referred to as research hubs, knowledge houses, civil society organisations, embedded in university departments or as part of government. The image below gives a sense of how Indian think tanks can be categorised:

In this context, the environment into which a think tank is born is different from its counterparts in developed countries. The funding mechanisms, laws and regulations, and other governing principles are all determining factors not only on the operational front but also in view of how an organisation is going to function, its research mission and, by extension, its core vision.+ I have found that very few research organisations in India call themselves ‘think tanks’, regardless of the fact that their work contributes significantly to the country’s policymaking process.

Based on my research findings, I suggest the following classification for Indian think tanks: 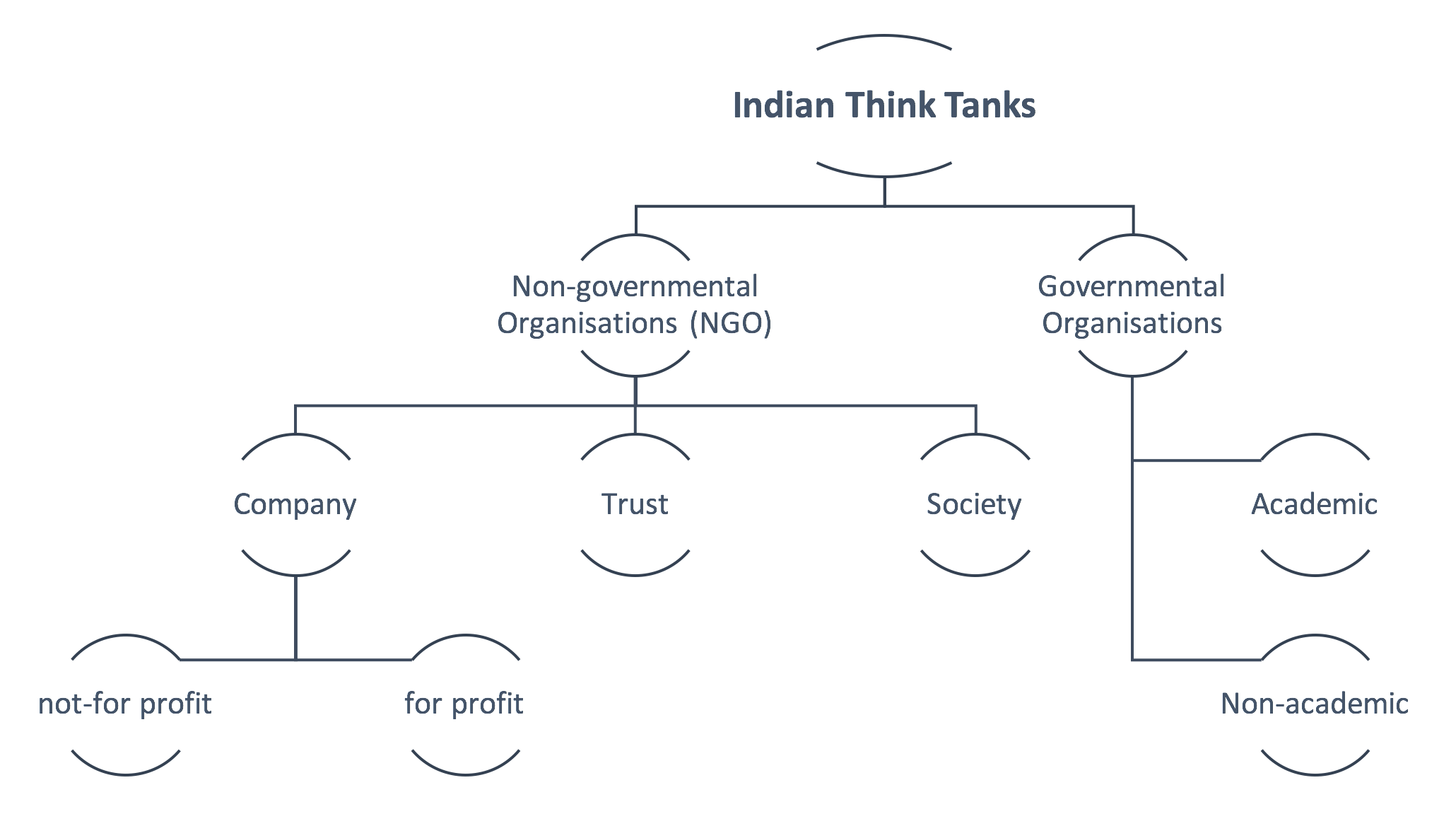 Governmental organisations are those which are completely or partially funded by the government. They also include organisations set up by Ministries and public or private foundations, all of which function autonomously. Educational research institutions affiliated or certified by governing councils, like the Indian Council of Social Science Research (ICSSR), form the academic part of the typology. This list also includes organisations which are set up as a part of collaborative efforts by the central or state government with an international organisation.

Non-governmental organisation (NGO) is the most popular term of identification used by Indian think tanks. An NGO can be registered as a company, a society or as a trust. Separate regulations and laws govern each due to differences in funding mechanisms, governing structure, tax laws and the degree of transparency required. NGOs are further differentiated as either not-for-profit or for-profit. The former type is more common, due to tax exemptions and a sense of credibility that a not-for-profit status conveys.

In India, there are differences in the level of influence think tanks exercise in creating alternative discourses. However, there is general acknowledgement that the growing number of think tanks strengthens India’s strategic discourse and thus increases the quality and effectiveness of the policymaking process.

Have you conducted research on Indian think tanks and have an opinion on their affiliations and how they can be classified? Drop us line!

Previous
Part 4 of  Indian think tanks: a view on their journey
Next
About the author:

Annapoorna Ravichander:  Executive director of the Public Affairs Foundation (PAF) in Bengaluru, India, and On Think Tanks editor at large for South Asia.

How well does your communications (comms) team collaborate with the researchers or policy experts at your think tank? Is your comms team only brought in when a paper is...

Further together: triggers, qualities and bottlenecks of partnerships for sustainable change

This article is adapted from Dr Joseph Asunka’s keynote address at the OTT Conference 2022. The justification for partnership is clear; the path to successful...

The Crisis Lookout Coalition came together in 2021 in support of a new, smarter, risk-informed approach to paying for disasters that protects more people caught up in crisis, especially in the lowest-income...

Think tanks are civil society organisations with a particular focus on conducting research to influence policy. But within this broad definition, there is a lot of diversity. Over the years,...