The ODI digital strategy, which I first outlined in a series of blogs for onthinktanks.org, was awarded Online Strategy of the Year 2012 at the prestigious Digital Communications Awards, held in Berlin on Friday. ODI beat off competition from over 100 multinational corporations and specialist digital agencies to claim this major award. 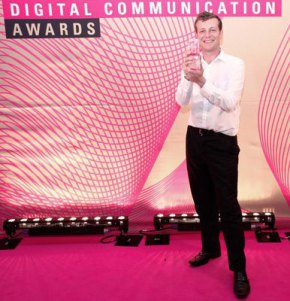 The following post is based on the speech I gave to the jury and explains very succinctly what the strategy is and where/why it has worked. Massive thanks to Enrique Mendizabal at onthinktanks.org and Sophy Kershaw at ODI for their help in developing the speech. I couldn’t have done it without them. 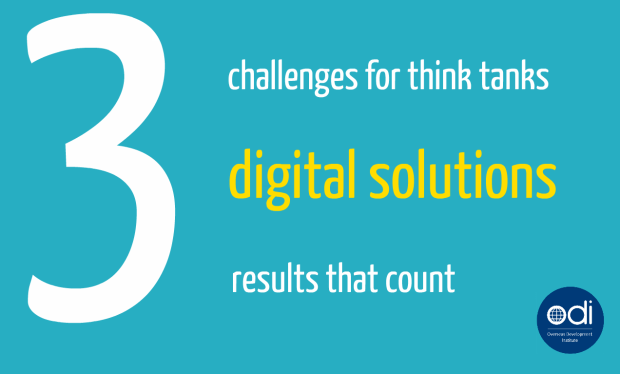 Tony Blair’s policy adviser used to say that the ‘first thing you have to do is win the battle over the problem’. In other words, if Tony Blair doesn’t think there is a problem, then you’re not going to get backing for the solution.

A think tank works in the same way. You have to persuade the researchers that there is a problem before you can implement a solution. So what is the problem at ODI? We identified three major challenges, and three solutions that would help to tackle them.

Think tanks sell ideas. Ideas based on research. Ideas that aim to change the world.

But you can’t sell ideas in the same way as you would a car, or an iPhone. Apple and Ford sell their products to make money, but our ideas are free. So they will always be able to use their income to shout louder and harder.

Which means think tanks have to be clever, if their ideas are going to be heard.

Nowhere is this truer than in the online world. A world bursting at the seams with ideas.

Our response to this challenge was to return to first principles of communications. You wouldn’t create a radio station to reach the listeners of the BBC, so why did we create a new website for every project?

We wouldn’t. Instead we would follow an approach we called ‘being there’. We don’t expect people to come to our sites, instead we push information to them, through the online channels they already use.

How does this work in practice?

For a concrete example of the results, we can look to an event series we held a few years back, right at the start of this strategy.

In 2009, ODI was planning a series of lectures on how the private sector can help to reduce poverty. They were to be the first events where we streamed video live online.

Following the ‘being there’ approach, I suggested that ODI should partner with another site for the online portion of the events: Business Fights Poverty.

But the idea met cultural resistance. It was seen as losing control, because we would be directing all traffic through to another site and people would have register there.

Still, we agreed it would be worth a trial run. The results were dramatic. 150 people watched our first online event, coming from a much broader range of private sector companies than ODI had ever had on its’ contact books.

The event series remains one of the most successful we have ever held. Why? Because in our business, it isn’t about numbers reached or sales made. It is about the right people taking up an idea and acting on it. And we had people from KPMG, De Beers and other companies listening to us and taking the ideas back to their boardrooms. Both online and offline activities were creating a direct link between an idea and its target audience. 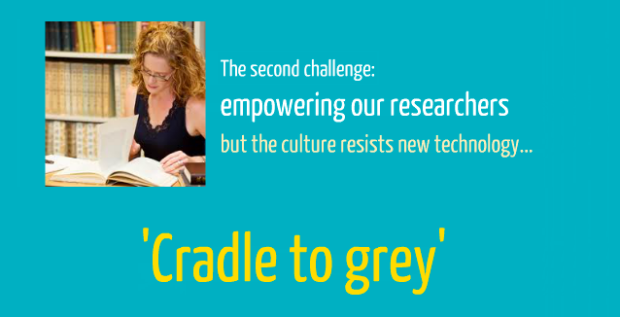 Empowering researchers is particularly tough online. Many researchers are by nature suspicious of new technology.

Our solution makes online activities central to the research, from start to finish, bolstering the reputation of the individual researchers, and that of ODI, at the same time. We call it ‘cradle to grey’.

First comes the cradle. This is the time in which research ideas are being developed. Researchers can use wikis to work collaboratively; they can build resource libraries through tools like Delicious or Mendeley. These tools create networks of people interested in ideas.

Next comes the life. This is the time when research is complete. Now, a researcher can publish their work quickly and in multiple formats – a podcast, a video, a blog, an infographic.

Finally, the grey. This is the lifespan of the research once it’s published. It is immortal. It never goes to the grave. Amazon is known for this ‘long tail’ effect, and it holds for research too.

What’s more, researchers can grow their long tail. They can post their research to Wikipedia, they can upload their publications to archiving sites, they can release it all under a creative commons licence.

Here’s an example: in 2015 the United Nations millennium development goals will expire. ODI researchers are already among the thought leaders on the future of global development. But how could we best empower them and their work online?

Surprisingly, there was no existing channel for research on this subject. So, we set up a WordPress blog. Now, they have a platform for their ideas.

They need to gather views on what should be in the next set of goals.  So, we are about to start a crowdsourcing initiative. Now they have an online research process.

They wanted to track the state of the negotiations. So, we created a Twitter account. Key figures such as the head of the United Nations Development Programme and Chief of Staff at the Department for International Development in the UK are following. Now they have a network to push their ideas to.

Together the quality of research, and the offline and online activities held around it, have led to recognition from the highest levels. A few months ago we received a letter from David Cameron. He says he appreciates the work we are doing and is listening to our messages. 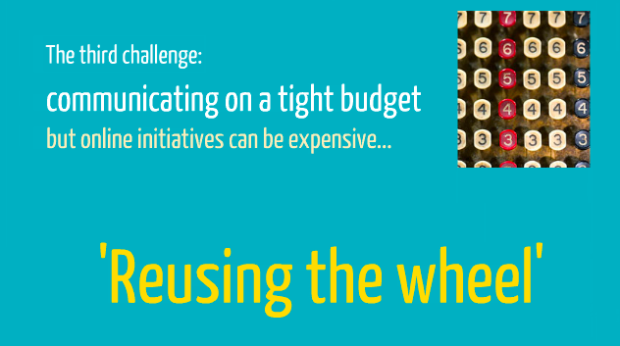 ODI is a not for profit organisation, a charity. This means that every penny spent must be accounted for.

But online was seen as expensive for think tanks. They had spent tens of thousands of pounds on building websites for each new project.

There was no way we would get funding for our strategy if it cost too much. So we made it a point of principle that we wouldn’t spend money on something we could get for free. We wouldn’t reinvent the wheel; we would reuse what we had wherever we could:

This approach made it possible to deliver the whole strategy on less than €5,000 over the first two years, mainly spent on extensions to Sharepoint and subscriptions to a few cheap online tools.  Nor did we spend much on staff: until last year we only had one full-time person working on online communications – me.

But it isn’t just people in ODI that have taken notice. The sector is following us too. The three principles of our online strategy, “being there”, “cradle to grey” and “reusing the wheel”, are popping up in research strategies all over the world and I’m increasingly being invited to present this strategy to my peers.

These are people who understand that online work isn’t about replacing old ways of working, it is about enriching their research. Whatever it is about and wherever it takes place.

Previous
Part 10 of  Think tanks and video
Next
About the author:

Rethinking how we publish our research

Does your think tank embed communications staff in research teams?

This article reflects on the practicalities, benefits and challenges of embedding communications staff in research teams, based on the experience of four policy research...

Today, most policy research organisations have some degree of in-house communications support. Typically, this is a centralised team. However, in some organisations...