on the definition of think tanks

By  Enrique Mendizabal
Previous
Part 2 of  Think tanks: definition and terminology
Next

I have yet to be able to get through a presentation or debate about think tanks without the issue of their definition getting in the way of what would have otherwise been a thoroughly interesting discussion.

The common definition describes them as a distinctive class of organisations -different and separate from universities, markets and the state. This definition has been employed by experts in the field like Diane Stone, James McGann and others. However, as I found in the study of think tanks in Latin America, Africa and Asia, these think tanks only exist in the imaginary of those who idealised the Brookings and Chatham Houses of this world.

Tom Medvetz paper, Think Tanks as an emergent field, provides strong arguments against this view. He argues that this definition is limited because:

This last point is worth exploring further. I’ve attempted to describe think tanks according to their functions as well as to their position in the knowledge policy space. Medvetz takes this further to explain how the positioning of the think tank involves a necessary ‘complex performance of distancing and affinity’. He describes how, although think tanks assert their independence by differentiating themselves from universities, advocacy groups, public bodies and lobbyists, they simultaneously pursue strategies or behaviours that mimic their values and practices: appointing fellows, investing in communication departments and an array of advocacy tactics, pilot projects and policy proposals, and seek to actively influence and lobby policymakers.

The act of definition is then the art of forging the identity -independent or dependent- that best suits the think tank’s objectives; which, according to Medvetz’ analysis, is the accumulation of authority. And in a multi-actor world, this is essentially a process that takes place in relation to others: Brookings defines itself in relation to the Heritage (U.S.), ODI in relation to IDS (U.K.), and CIUP to GRADE (Peru).

I used to work in CIUP (a think tank linked to a Peruvian University). GRADE (an independent but consultancy-based think tank) was not so much a competitor as it  was comparator. We defined ourselves as ‘not them’. And when I attempted to describe my work to my banker friends I used the image of a think tank more familiar to them, Apoyo, and then added a number of caveats (but in the university, focused on public policies, non for profit, etc.). Even now at ODI, barely a week goes by without a discussion about what IDS or CGD do differently.

So think tanks define themselves in relation to one another and in relation to the organisations that they want to be, depending on the circumstance, differentiated from or associated with (it could be the plot of any coming -of-age film: the son rebelling against the father only to realise he is just like the old man). In doing so they struggle to find their right position in what Medvetz described as the social space: 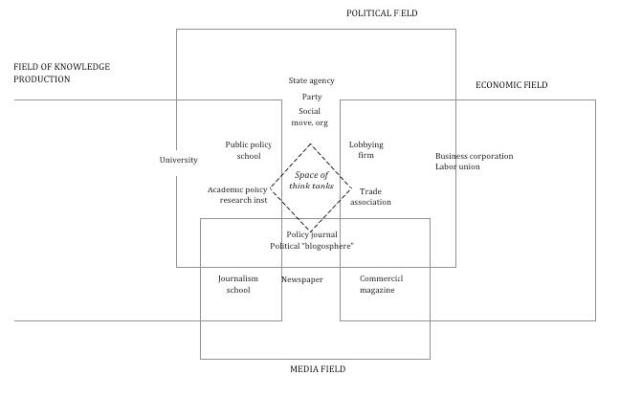 A definition then? I continue to find the definition of think tanks a futile endeavour (I am borrowing from Medvetz who borrowed from Simon James). Think tanks can be described by what they do (think tanks are like the bicycle chain that links the policy world with the research world, applying academic rigour to contemporary policy problems, maybe) and this should be understood within the boundaries of the context  in which they exist and that account for their vast differences (more on this soon).

Previous
Part 2 of  Think tanks: definition and terminology
Next
About the author:

The future of think tanks in a post-Covid-19 world: Looking to (social) science for the answers

. Social science and the humanities have long held important places in modern society for the insights, stimulation and escapism that they can provide in the best times...

More connections, less commitment: the impact of technology on networks

Information, a community, and connections may have once been enough to keep network members engaged (and possibly paying dues). But now people can get these things...

Technology for society: the forgotten principles

‘Technology for society’ is an oversimplified concept. Everything from analysis reports, dashboards, and command centres to self-service websites are put forward as the holy grails of...

As a technology enthusiast, I am an ardent believer that Africa’s socio-economic development is firmly linked to her technological development, growth and advancement....

How think tanks in developing countries can embrace technological change

Think tanks are a special kind of organisation that aim to produce knowledge to transform society. Knowledge is a public good – like health and clean air – that can...

How COVID-19 is affecting funding, and what think tanks and donors can do about it

Many large donors have responded to the COVID-19 crisis by introducing new funds to support COVID-19 related research or sought to make existing funding more flexible....