At its core, all content developed by think tanks should be strongly evidence based. +The Internet will not change this: if anything, the growth in competing messages makes this more important to stand out from the crowd. How then, is the Internet altering the messages think tanks deliver? In my mind, there are three major opportunities:

A researcher may often, while researching, use the very same online tools to plan and carry out their investigations as they do to communicate their findings. This is primarily the case with web and email, but could also extend to networking tools like Facebook, LinkedIn and Twitter; or productivity tools like Google Docs, which can be used instead of Microsoft Word. Innovative researchers can therefore open up their work to discussion from an early stage, and use the Internet as they’d use an event or workshop for discussion and debate. This is another form of the function traditionally carried out by Working Papers, but updates this function for a digital age by making it clearer that research findings are for discussion.

At ODI, digital networking tools for generating and sustaining discussion are available to researchers from the start of the research process. This inevitably changes the nature of messages being shared, as they are less final and naturally less authoritative. The hope is that these tools can improve the quality of outputs, as discussion can be a form of early and constant peer review. The tools can also assist in later communication of the research, as they build a group of champions to disseminate the messages to, who can subsequently disseminate the messages further through their own networks and contacts.

Some of the tools we’ve used in ODI include:

In practice, the extent to which messages are made public depends on researchers being ready to engage publicly at an early stage, which may not always be the case. As a result, a number of pilots of the above tools have been primarily internal to ODI, which as a fairly large think tank is easier than might be the case at other think tanks where staff numbers are limited.

One of the main avenues for communication when research outputs are nearing completion is dissemination through the Internet. My previous blog on ‘being there communications’ looked at how online channels through which to disseminate are changing. But the format in which dissemination occurs is also changing. For one, creating summaries that are ‘written for the web’ can be essential, because people scan rather than read webpages. These summaries can act as funnels, allowing people who are seeking content on a particular subject the chance to decide whether to read a long paper early on. Short videos, audio podcasts, or blogs can be used in a similar way to introduce a paper.

Alongside summarised messages, the Internet can also offer a chance to develop less authoritative and more personal messages than a traditional research paper allows (e.g. via email or blogs), with individual teams and researchers taking on the role of messengers. These more personalised messages are the closest Internet communications come to one-to-one meetings – one of the most effective forms of communication for think tanks in policy influencing.

At ODI, we do not advocate single policies at an organisational level, preferring instead to maintain a focus on quality and breadth of evidence as the strength for our message. However, at the team and individual level, personal interpretation of research evidence can play a role in communication. This means ODI’s messages can sometimes resemble a pyramid, becoming more personal and including more people the further down the pyramid you go: 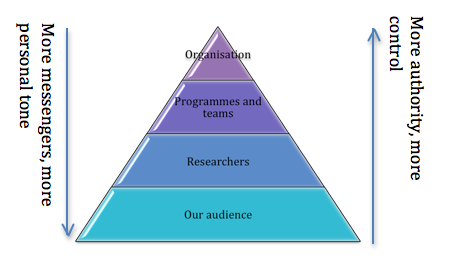 At the bottom of the pyramid lies the audience, who we hope will be passing on our messages to others. However we can’t control the interpretation or tone of these messages. Given the lack of an ‘organisational line’ at ODI, if discussions arise amongst our audience that question findings or conclusions – e.g. on blogs, Facebook, Twitter, or any of the other locations in which ODI research is published – it would be difficult to refute directly as an organisation. It would also not be very effective if we did, as responses from a faceless organisation are not very persuasive. However, by empowering our researchers and research teams to use these channels themselves, they can discuss directly with the audience what the evidence means, and be a lot more persuasive at the same time.

ODI’s communications team tries to support these more personal messages by offering formats that highlight an individual view of research. These include videos, audio files, blogs or Opinion papers, media interviews and articles. Ultimately, our aim for the future is to start bringing all of these different types of messages together into single packages on pieces of research. As an example, this could include:

Nowadays, this could be brought together on a single webpage, but in future perhaps it would be an iPad or Kindle app.

‘Today’s newspaper is tomorrow’s fish and chip paper’. Although this saying has long been popular in Britain to describe the ephemerality of newspaper coverage (and was probably never strictly true as important stories lived on in the imagination of readers), it did capture the essence of the newspaper as a medium. Within a few days of publication, finding information or a story from a newspaper would not be an easy task, involving trips to libraries and trawls through archives.

As well as threatening the very existence of many newspapers by undermining various media business models, the Internet has also changed the nature of publications and content in general. No longer is most content allowed to gradually whither (go to the grave) in minds of readers. Instead, it grows old (and grey), but is still generally accessible and useful to some people. Businesses have been built around this fact, in what is commonly referred to as the ‘long tail of the internet’.

Given this change in the time horizons for which research is available and being actively used, organisations that are able to make the most of their research – however old it is – could boost their reputations:

As argued earlier in this blog, getting the most engagement and discussion around research early on and throughout the research and communication process will help to make the strongest products, whatever form they may end up taking. If your work will continue to be available online for fifty years hence, this strength will be essential to standing the test of time. This approach is about making sure the ‘tank’ in ‘think tank’ isn’t a closed box, but that messages and research are open to discussion from the outset and for years to come.

The next blog looks at the final strand of ODI’s strategy, ‘reusing the wheel’ (as opposed to reinventing it): the free (or cheap) digital tools, technologies and processes that can improve the quality and delivery of all communications products.

How to get started with video for policy communications

This article has been cross-posted, read the original post on Cast From Clay. Stories are essential in policy communications. That’s because research is never...

OTT Consulting is facilitating a partner and stakeholder consultation and engagement process to inform the implementation of the Luminate Foundation´s organisational strategy refresh...