The Brookings Institution: What Do Its Numbers Tell Us?

Think tanks often rely on numbers to argue for sound policy, to shed light on a complex situation or track changes over time. Curiously, though, we rarely apply numbers to the analysis of think tanks themselves. This is regrettable, since a closer look at think tank budgets helps us understand the scale of their operations, and tells us how think tanks develop over time.

To illustrate insight through numbers, the Brookings Institution + is a good place to start. Many think tank professionals regard Brookings as a benchmark in the field. Moreover, Brookings’ key data is highly accessible.  This accessibility is a result of excellent legislation mandating financial transparency for US nonprofits, good practice by Brookings in posting documents, and great online services aggregating nonprofit information. One of the best such services is Charity Navigator, a website designed to be a “guide to intelligent giving”. Charity Navigator posts the tax forms that Brookings has submitted to the Internal Revenue Service (IRS) since the year 2000. As the IRS requires institutions to report their detailed finances as well as some governance arrangements, the tax forms give us a comprehensive look into Brookings’ operations, and at the sheer scale of its activity. 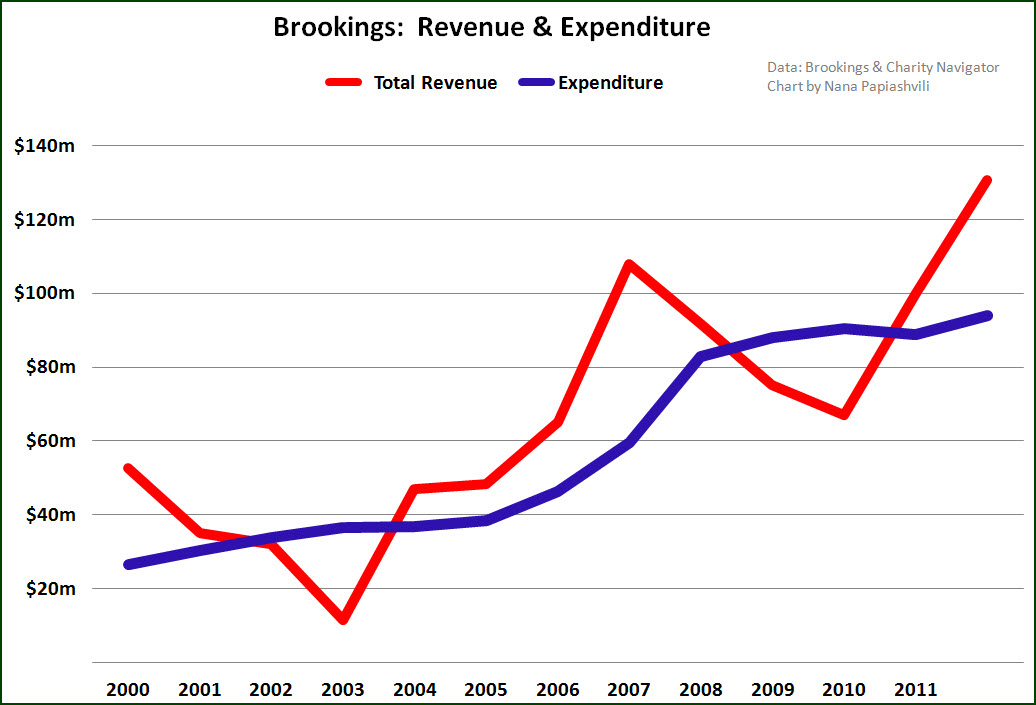 What, then, stands out when looking at Brookings’ tax returns?

Brookings has grown spectacularly over the last decade. It more than tripled its budget between 2000 and 2012 from $26m to $94m. Brookings grew particularly quickly between 2006 and 2008, when its expenditures (formally: “total functional expenses”) grew by more than $12m each year. Contributions have continued to grow over time, despite a dip in the early 2000s, and particularly low revenues in 2003. As often happens for institutions which receive contributions in large chunks, Brookings’ revenue growth is uneven. In 2007, for example, Brookings had a total revenue of $108m, leading to a surplus of more than $48m dollars, which was in turn followed by drawdown deficits in 2008 and 2009. Translating peaks and troughs of revenue into steady growth is likely to keep management fairly busy.

Brookings’ net assets have also continued to expand, albeit more slowly. In the year 2000, Brookings had $266m in net assets that grew to $381m by 2012. Some changes in net assets, such as the decline from $371m in 2007 to $296m in 2009 coincide with financial crises, but the full data also suggests that Brookings borrowed more, possibly taking advantage of low interest rates. Consequently its liabilities quadrupled between 2007 and 2008, from $11m to $43m dollars. As of 2012, Brookings’ total assets stand at $437m dollars with liabilities of $56m. While the financials are accessible, they are not entirely simple. For example, net assets include commitments of $91m from long-term grants, so that Brookings’ actual endowment is $266m, not the sum of its net assets.

Audited accounts, available on the Brookings website, show that the endowment is invested in a diversified portfolio: next to its real estate and property ($45m), Brookings has positions in long-term equities ($117m), hedge funds ($70m), private equity limited partnerships ($48m) and US Treasury funds ($28m). Brookings suffered slight losses on these holdings in 2012, perhaps suggesting that wisdom carries uneven returns. If you find these details as engaging as I do, you find the audit report behind this link. (An online test for Asperger’s is here.) Otherwise, the main message is that Brookings is in such good financial shape that it could almost sustain core programming without raising new funds.

Brookings’ costs for fundraising are about 3% of its total expenditure. These comparatively low costs are likely made possible by three factors:

Brookings is particularly transparent about its donors, exemplifying best practice. The Brookings 2012 Annual Report lists nearly 650 contributors, in their respective contribution brackets. A total of 20 contributors prefer to remain anonymous, however only one of them is among the top 23 contributors who have donated more than $1m. From the contribution thresholds, one can infer that these top 23 donors together have contributed more than $30m in the last year. Put differently, less than 4% of donors account for more than 35% of Brookings’ income from contributions. This stark concentration underlines, among other things, why think tanks need a differentiated membership model to keep engaging their most generous donors.

Brookings’ administrative expenses have grown over time, from about 16% in 2000 to around 24% in 2012, with fluctuations likely reflecting one-off investments. However, the relative percentages of programs versus administration should be treated with caution since you can apply a variety of approaches to allocating costs, without becoming particularly poetic in your accounting. Moreover, high administration costs may reflect rigor in determining program expenses, rather than expensive overhead. (See this TED-Talk by Dan Pallotta arguing for a focus on delivery, rather than low overheads.)

For those interested, Brookings’ tax forms show the remuneration of senior leadership as well. Charity Navigator gives the compensation of Brookings’ President without being direct, as 0.46% of annual revenue. Percentages are probably a good way of thinking about leadership salaries, to gain a sense of appropriate perspective. Brookings states on its IRS form that executive remuneration is determined by a compensation committee, which studies comparable salaries. To offer one such comparison, Strobe Talbot, who has been leading Brookings since 2002, earns less than the CEO of the ASPCA, the largest animal protection organization in the US.

Showing what a big budget can pay for, Brookings reports on its website that it “brings together more than 300 leading experts in government and academia from all over the world”, and according to its IRS forms it employed 554 staff in 2012, compared to 319 staff in 2007. Currently, Brookings lists 357 Experts, of whom 50 are Directors of some sort, 333 are Fellows (some of whom have dual appointments as Directors), and 242 are described as “Senior”.

To illustrate the scale of this operation, Brookings has more Directors than most think tanks have research staff, and more fellows than many countries have policy researchers. If think tanks themselves were countries, Brookings would have aircraft carriers. It should be noted, however, that of all the 333 Fellows, 204 are listed as Nonresident. The tax form clarifies that Brookings employs 119 people with an annual salary above $100.000, which, subtracting a handful of top administrators, may be a good ballpark proxy for the number of senior full-time resident experts. Possibly one lesson that smaller think tanks in developing countries can take from looking at Brookings is not to try to be Brookings — with smaller budgets, you are better off specializing rather than stretching yourself too thin across many issues. That said, practice everywhere would improve if think tanks themselves would argue for more transparency of funding, and exemplify good practice in the field.

It has been a few years since I was a graduate student, yet I find that whenever I am in a restaurant I still retain the habit of reading menus from the right, running down the column of numbers to identify a good price before scanning left to look at the dish. While reading from the right, focusing on the numbers, is unlikely to expand our culinary horizons, the approach may have its merits when looking at think tanks. The budget lines and price tags, the ratios as well as their changes over time, they all help us understand think tanks in the way that think tanks can help us understand the world.

How have southern think tanks responded to the pandemic?

. The pandemic imposed many unprecedented challenges on think tanks in the Global South. Amid lockdowns and uncertain cashflows, they found themselves overstretched...

Scaling up impact – the key challenge for the development community

‘Scaling up impact’ is the new watchword in development. Cynics might be inclined to dismiss it as the newest fad in the merry-go-round of fads in development...

In the final article of this four-part series on AidData’s experience and learnings from forming partnerships with two Africa-based organisations, we share a rough...

In part three of this four-part series, we share some of our key findings and challenges surrounding North–South partnerships, informed by our own journey to build more...

The global pandemic has brought inequalities in, and de-colonisation of, foreign aid to the front and centre. Researchers from the UK-based think tank ODI called the...

In part two of this four-part series, we describe the initial steps we (a US-based international development research lab) have taken to identify new working partners in...