I’ve spent the last six years working in think tank research communications – from the International Growth Center (IGC), to the Overseas Development Institute (ODI), and now at the Center for Global Development (CGD). Over this time I’ve learnt a lot about the nature of think tanks, research impact, and the role of communications within these types of organisations. How has the role of think tank research communicators changed, and where do I see it going in the future?

A tale of three think tanks

I joined the IGC in 2013 when only one person had been working on communications part-time, covering 14 country offices. At the time, the IGC was solely funded by one donor, the UK’s Department for International Development (DFID), and operated primarily as a grant-making organisation. The world’s leading economists partnered with the country offices to identify questions that needed evidence-based answers, applied to the ‘Hub’ for funding, and set out to influence policy with the (mainly quantitative) findings. In this process, it was hard to tease out a role for ‘Hub’-based communications staff. We were already securing impact (our in-country offices were influencing policymakers and our economists were getting into top journals) and we didn’t have to worry about funding. Beyond production, communications staff didn’t play a central role in the research impact process.

It was a very different world at the ODI when I joined in 2015. It is a project-based organisation, bidding for funding from governments and foundations across the world. They often partner with other organisations in consortia arrangements, lending their expertise in qualitative research, evaluation, and communications. As a result, there was a heavy investment in communications staff, both at the ‘center’ (managing production, running institutional communications) and in the ‘programmes’ (crafting strategies, writing outputs, engaging closely with researchers). And what did researchers think? Some understood the value of communications and involved them in their research from the outset. Some saw their work as more of an academic exercise, and therefore barely engaged communications staff. And the majority were somewhere in the middle – seeing the value of communications, but unsure how to tap into it.

Finally, early this year, I moved to the CGD. They operate very differently again, writing concept notes for research to address ‘big ideas’ and attempting to secure funding from a variety of private and public funders. Here, they make a distinction between communications (which is focused on media and production) and outreach (which is focused on policy impact). It may seem like a subtle shift from ODI, but it matters. The institutional brand is less prominent than ODI’s, but by contrast, the individual brands of the researchers are much stronger. This dynamic means individual researchers have larger mandates to speak externally, and therefore work closely with outreach staff to craft these engagements. Communications, by contrast, is often only involved at the end. This model can have the unfortunate consequence of skipping the role good branding, design, production, and multimedia thinking can have on research impact. As a result, the communications team has begun implementing standard planning meetings and documents across the organisation.

What do we exist to do?

I would argue the role that think tank research communications staff play, and the value they are accorded by researchers, is integrally bound up in the importance think tanks (and individual researchers) place on four target areas for impact: academic, media, public, and policy. Our role within an organisation that prioritises media impact will be very different from our role within an organisation that prioritises policy impact. Of course, most organisations span several of these, and may have individual projects that lurch into another area. A primarily academic impact focused organisation may publish an animation occasionally. But all think tanks prioritise these four target areas in different ways, often unconsciously. 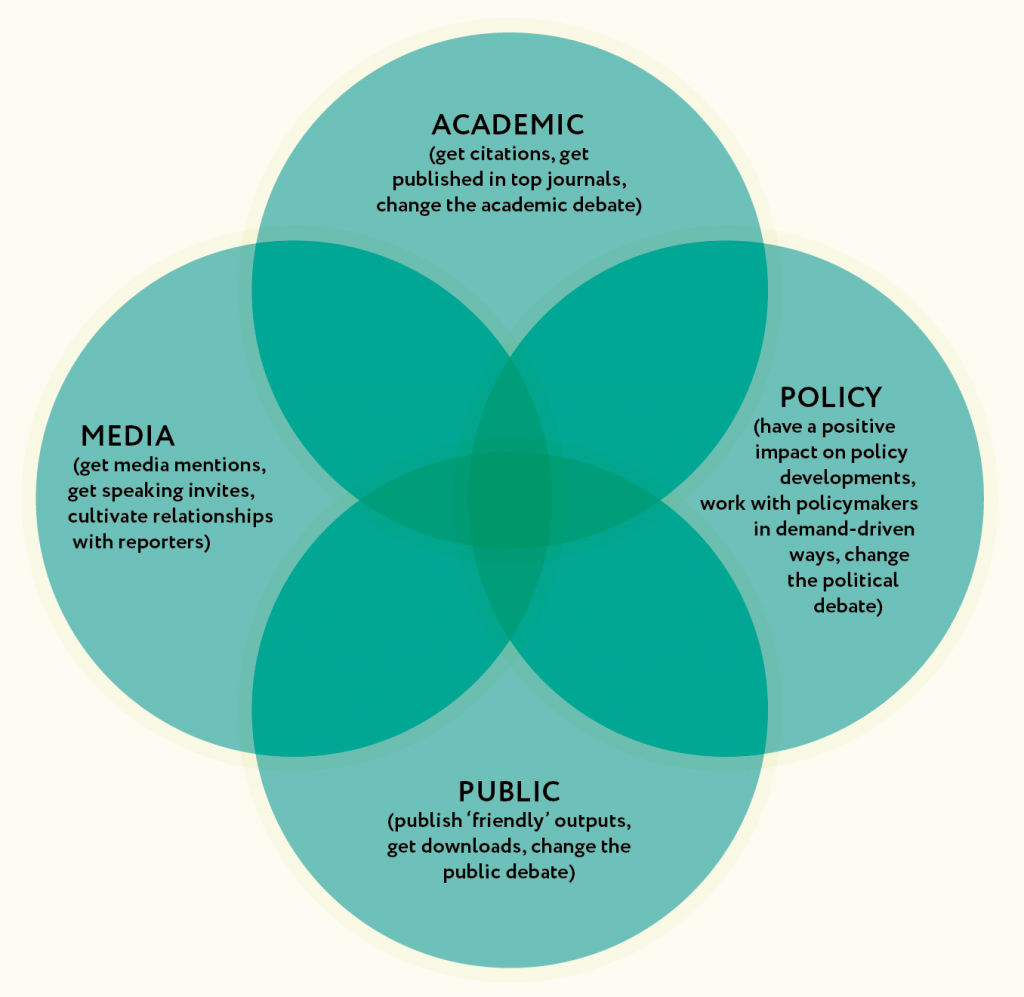 This is a conversation I have had (and expect will continue to have) in every organisation in which I’ve worked – What do we exist to do? Asking this question matters for two reasons. Firstly, as has been reported by communications strategy firms like Soapbox and We Are Flint, the nature of the ‘think tank’ is changing. We used to be able to influence policy by speaking directly to policymakers and policy-influential media outlets. But the rise of social media has increased the role of the public in policy change. This has (or should) radically alter the way in which think tanks engage with research and ideas. We now need to make sure we’re going after all four target areas with big ideas about the world. As Robin Niblett, head of Chatham House, recently said,

think-tanks must consider whether it suffices to try to remain sources of objective debate and analysis, or if it is time, once again, for them to adopt a more proactive stance, being explicit about the principles that they believe should underpin peace and prosperity.

Secondly, the role of think tank research communicators is changing. Thankfully, this is a field on the rise. When I started my programme communications role at ODI, there were few like it in the sector. Now, more and more organisations have realised the need for a bridge between research and communications to have impact – no matter what impact you’re after. Researchers have realised that without creative and impact-driven communications, their research is unlikely to get pick-up, within any of the four target areas. And communications staff have done a better job of articulating their worth and bringing their skills to bear on the research itself. This creates a need for people that both understand research (often needing a masters in the subject, and expertise in different research methods and writing styles) and communications (often bringing editing, writing, multimedia, digital, and advocacy skills to bear). This is not an easy role to work in. It requires balancing the need for rigorous, nuanced, and objective research with summarised, accessible, and engaging communications. But it is essential for research impact.

So to answer my question, What do we exist to do? I would argue that the primary role of think tanks is to influence policy. But to do so, as Robin Niblett said, they need to be more proactive. It’s not enough to merely produce a 60-page document, format it nicely, and move on to the next project. Think tanks need to be defining research impact broadly – going after academic citations, changes in the policy and public debate, and media hits. Only by doing so can they influence policy in this changing environment. I think it’s less about the organisational or funding structure (though open-ended funding helps!), and more about the way researchers and communications staff conceive their complementary roles and skills, and what research impact really is. If think tanks embrace this perspective, it will have profound implications for the way that research communications staff are viewed and operate. If they don’t, I would argue our days are numbered.

Caveat: The views expressed here are personal opinion and do not reflect the views of the International Growth Center (IGC), the Overseas Development Institute (ODI), or the Center for Global Development (CGD). In particular, I’m reflecting the situation in the IGC and ODI at the time I worked there and cannot speak to future developments.

Helen Dempster:  Assistant Director and Senior Associate for Policy Outreach on Migration, Displacement, and Humanitarian Policy at the Center for Global Development