Ten researchers from 9 countries met in Lima at the Instituto de Estudios Peruanos last week for The Exchange -an initiative of On Think Tanks, The Think Tank Initiative and the Think Tank Fund.

The four day event served to kick-start a process of matchmaking between the participants with the intention of developing and implementing a series of collaborative projects.

If you want to read more about the meeting you can do so here:

The main focus of day 1, besides getting to know each other was a discussion on the factors that affect collaboration between think tanks. Leandro Echt, one of the participants published this very interesting post on the issue:

The second day focused on the collaborative projects themselves. We found that rather than only collaborative research, the participants were interested in collaboration -which could be in relation to action, learning, etc. 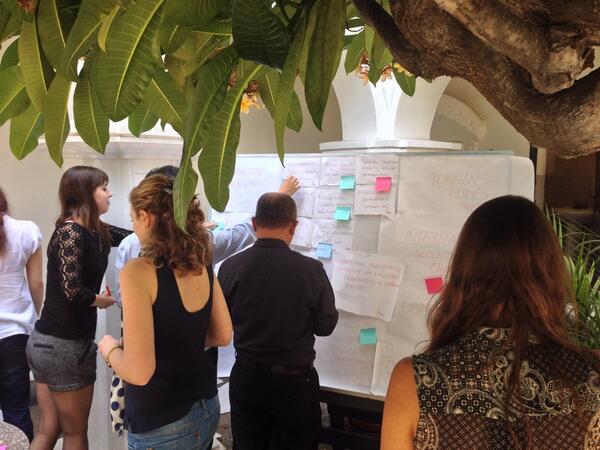 During the fourth day IEP hosted two presentation on organisational development and research issues. The presentations by Roxana Barrantes and Francesca Uccelli provided a platform to begin a discussion about the participants core interests:

The day began with Roxana Barrantes, IEP’s Director, giving a presentation on how think tanks are shaped by institutional endowments. Among other things, Roxana described IEP’s unique governance.

IEP is governed by a General Assembly whose members include current and former researchers of the organisation. The Assembly elects, from among its members, a council of directors (Research, Finance, Communications, and Operations -not in those terms), and the Executive Director.

This makes IEP, and many other think tanks in Latin America, a democratically governed think tank.

During lunch we visited a memorial in Campo de Marte called El Ojo que Llora (The Eye that Cries). This was an introduction to a presentation by Francesca Uccelli on Education and Memory. Her presentation focused on research that she and other members of IEP have undertaken about the way in which the recent history of the armed conflict in Peru is being taught in state schools. They found, among other very important things, that an absence of a clear policy on memory hinders the way that this very important period of Peru’s history is being taught.

During the final day the participants managed to discuss a number of possible partnerships and projects that will be followed up shortly.

Overall, this first meeting proved to be quite challenging. We, the organisers, had never attempted something like this. The On Think Tanks Exchange participants were extremely patience and willing to ‘give things a go’. I think they understood that we were learning by doing.

We will continue to publish resources and feedback from the meeting on the On Think Tanks Exchange blogto share with the wider public. Please visit the site and follow the initiative’s news.