Norway is the ninth-largest donor country, spending US$4.2 billion on official development assistance (ODA) in 2020 and is the second-largest donor in proportion to the size of its economy with annual spending on ODA of 1.11% of Norway’s gross national income (GNI). Even though, at the present, there is a cross-party consensus to maintain ODA at around 1% of GNI + in 2020 Norway’s Progress Party, given the sharp decline in GNI as a result of the COVID-19 crisis., presented  an alternative proposal for the state budget in order to institute sharp cuts in the development assistance budget for 2021.

The Norwegian policy research landscape is composed of a small ecosystem of think tanks and academic institutions covering both domestic and international research. Among the most influential think tanks are Civita and Agenda and, when it comes to academic institutions carrying out policy research, the Norwegian Institute of Foreign Affairs and the Peace Research Institute Oslo stand out. It is important to note that think tanks in Norway are politically aligned and have close links to political parties and labour unions.

In Norway, there is a general political acceptance of policy research because there are strong links between politically aligned think tanks and political parties. Similar to Sweden, Norway has a strong tradition of valuing evidence-informed policymaking and also has an established practice of government-appointed research committees that provide independent advice on policy issues.

Some of the most pressing issues of focus in the Norwegian think tank landscape are climate resilience, economic policy, social welfare, immigration, drugs legalisation, gender, and the production of petroleum. The oil and gas industry is the most important export sector of Norway and, given its prominence, think tanks prioritise much of their research agenda on this topic and contribute to policy debates. Other priority topics that have gained visibility in recent years are drug legalisation, gender identities, and bioethical issues.

When it comes to ideological alignment, most think tanks are non-partisan and refrain from participating in political debates or presenting a politically biased position. However, political think tanks are very clear on their ideological alignment and usually have clear ties with politicians, political parties and labour unions. Because of this, their work is usually aimed at a particular public. The most influential political think tanks in Norway are Civita (a liberal, centre-right think tank funded by enterprises that also fund the Conservative Party), Skaperkraft (a centre-right organisation funded by individuals and corporations), Agenda (centre-left,  funded by labour organisations, individuals and corporations) and Manifest (positioned in the radical-left and supported by Norway’s largest labour union).

According to data from the Open Think Tank Directory, 46.43% of think tanks in Norway are registered as non-profits, followed by university institutes (21.43%) and government research committees (21.43%). Only around 10% of think tanks in the country are registered as for-profit organisations, which might be related to the strong social welfare system and the high amount of funds that the government spends on research (2.07% of their GDP). 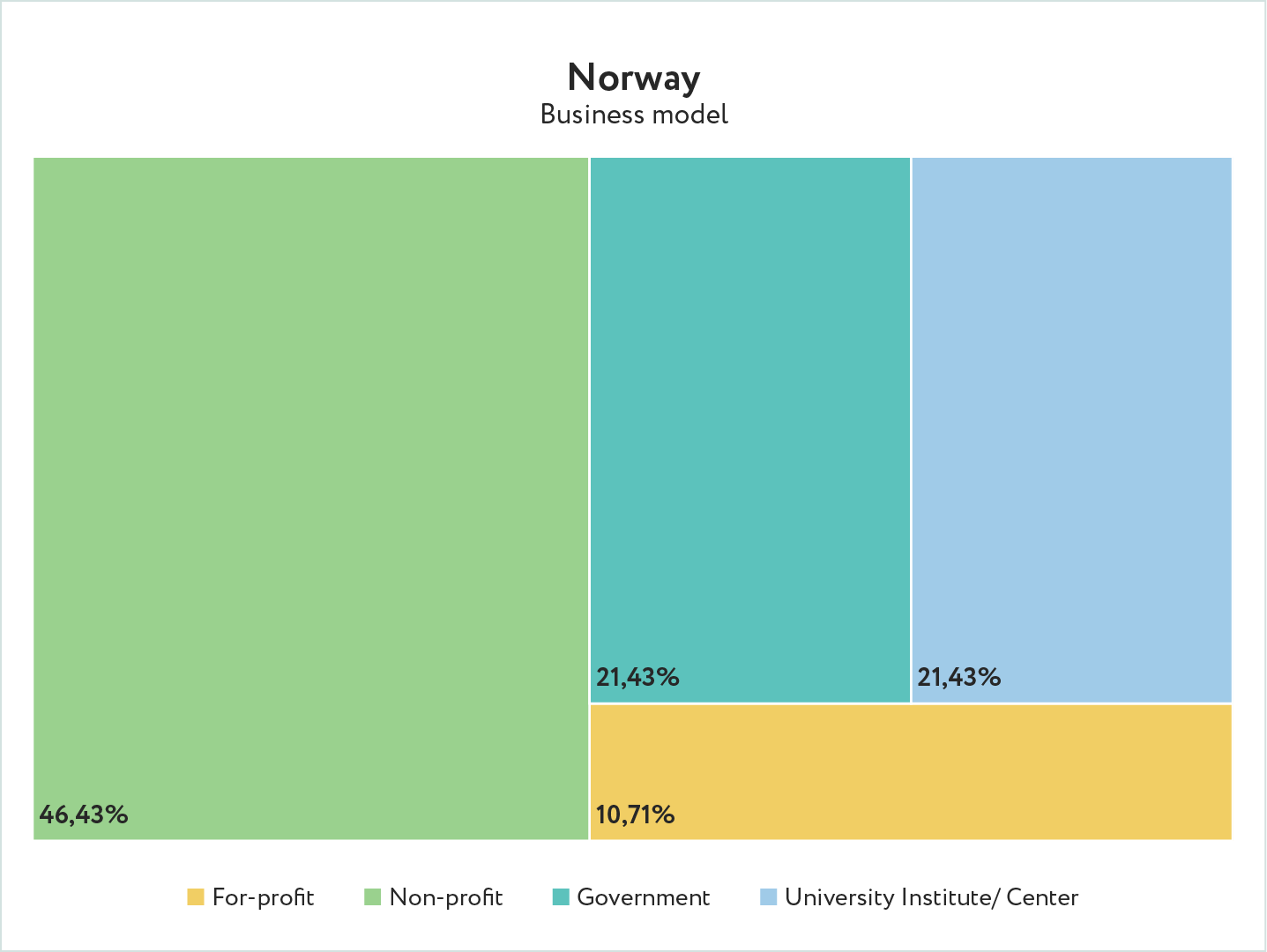 The main funding sources for think tanks in Norway are the national government, foundations, the private sector, and multilateral organisations. The government provides most of the funding for academic think tanks through the Research Council of Norway (the government’s research policy advice organisation, which allocates NOK 10 billion annually for research). Political think tanks also receive funding from the Research Council of Norway, but have other major sources of funding such as private foundations, corporations and, as mentioned before, labour unions.

Multilateral international organisations also play an important role in financing the Norwegian policy research landscape by funding both academic think tanks and political think tanks; it is more common for well-established research institutions to access funds from organisations like the European Union, the United Nations and the World Bank. The following visualisation illustrates the diversity in funding sources based on OTTD data. 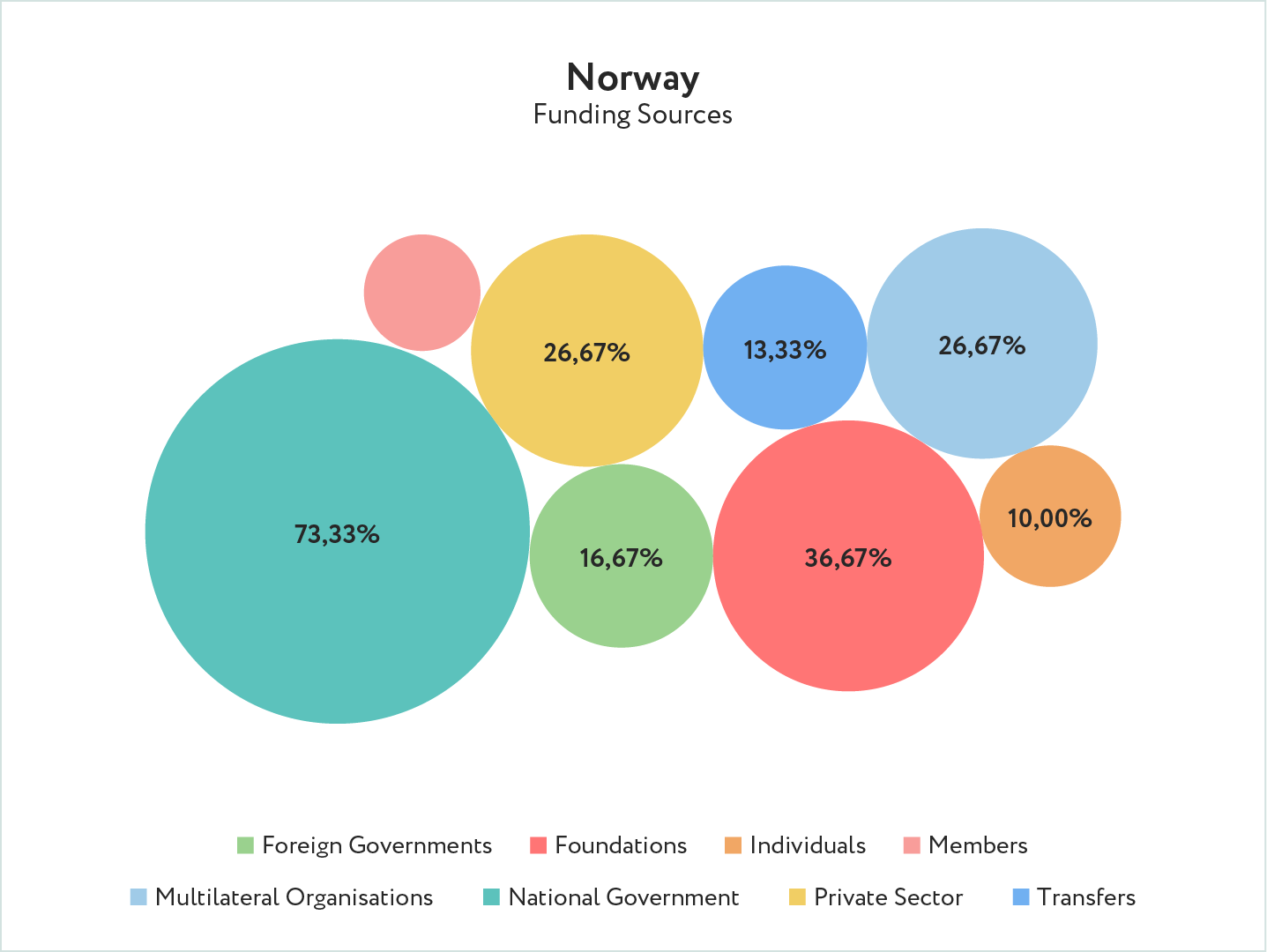 In Norway there is a strong tradition of evidence-informed policymaking and the government relies on specialised think tanks to provide policy options and to assess and evaluate the effectiveness of policies and programmes. This demand for evidence comes directly from the government, which is the main source of funding for research institutions in Norway, and partly from public opinion, as think tanks are well regarded as credible, reliable sources of information.

Labour unions have also historically been a source of demand for evidence, as they have acted in the past as creators and founders of think tanks like Fafo (an independent social science research foundation founded by the Norwegian Confederation of Trade Unions in 1982) or Manifest, which is mainly financed through a subscription scheme for trade unions that receive publications and access to lectures with their speakers. Media outlets and newspapers also have a growing influence on this ecosystem, acting both as consumers and distributors of the knowledge that think tanks produce, in particular political think tanks like Civita and Agenda.

When it comes to the influence on policy and public debate of think tanks in the country, think tanks play an expert advisory role by working with government officials and being appointed to carry out specific research projects. There is a healthy revolving-door culture between political think tanks and certain political parties, though not as strong as in the United States or the United Kingdom.

Previous
Part 8 of  Think Tank Landscape Scan 2022
Next
About the authors: