Sweden’s proximity to Russia and Eastern Europe has contributed to shaping the Swedish policy research ecosystem, which is strongly influenced by issues related to its geographical location. Its main areas of focus are security, geo-politics, foreign affairs, climate change, social policy and economic issues. In recent years, due to Sweden’s openness to trade and strong investments in renewable energy technology, the focus of the policy research ecosystem has also turned to China, especially on issues related to economic development.

Think tanks focused on both research and advocacy on policy issues are known as tankesmedjor,  and are a rather new phenomenon. Most such organisations have been founded since the millennium, and they do not have a strong influence on public opinion. Government-appointed committees are also a common practice in Sweden and act as spaces to bring together experts on issues like economics and immigration.

Sweden’s think tank landscape is not as big as in countries like the United Kingdom or the United States; however, the ecosystem is wide in terms of thematics, while the focus is on security, energy and foreign affairs there are also think tanks working on a broad range of topics including climate change, social welfare and social policy (including health and education), economic development, immigration and gender. Green topics have especially been on the rise for the last decade and have been explored by think tanks such as Fores, the Stockholm Environment Institute and the Swedish Society for Nature Conservation.

Think tanks in Sweden are often tied in one way or another to a political party or a labour union, or are aligned with a political ideology. As such, they often address the Swedish political context from a  particular point of view related to their affiliation. Usually, this  political ideology is widely known and clearly communicated by the organisation. However, some interviewees noted that in order for think tanks to have strong credibility in Sweden they need to demonstrate their independence. Think tanks associated with the left or the right face more scrutiny and are perceived as less credible than those who can demonstrate neutrality or non-partisan positions.

Arenagruppen is non-partisan, but self-identifies as a “radical and progressive organisation” that is close in ideology to the Social Democratic Party. Timbro is a leading free-market think tank close to the Conservative Party and financed by the Swedish Free Enterprise Foundation, and Fores is close to the centrist, green and liberal parties and self-describes as “the green and liberal think tank of Sweden”.

Interviewees identified other influential organisations with no visible ideological position, including Diakonia, a Christian NGO specialising in international development and international law; Global Challenge, an independent think tank that finds its core in scientific insights; and the Center for Business and Policy Studies, an independent, non-profit organisation with 280 corporate and institutional members that is close to the business sector.

Most think tanks in Sweden target a Swedish audience, since there are few international actors in the Swedish policy space. The influence of think tanks on policy debate is usually limited because most organisations do not have a strong influence on government or public opinion.

In Sweden, not many think tanks work specifically on gender-related issues; however, gender equality is embedded within most organisations’ culture and gendered research perspectives are mainstreamed across many different disciplines and agendas. For example, Sweden was the first country to introduce a feminist foreign policy, which has had an important effect on think tanks’ research agendas. An organisation working on gender-related issues is the Kvinna till Kvinna foundation, the BMGF could benefit from approaching this foundation to promote research on specific gender agendas, like women’s economic empowerment.

An important source of funding for research and development in Sweden is the government, with  3% of Sweden’s GDP earmarked for research (around USD 16 billion). Swedish think tanks benefit from this public funding, with organizations like the Center for Business and Policy Studies (SNS) and Fores, among others, receiving funds from public research-funding agencies like Vinnova, Sweden’s innovation agency.  Think Tanks also receive funding from private foundations and enterprises like Volvo, Electrolux, ​​AstraZeneca, Spotify and Ericsson.  Most of the research taking place in Sweden – around 70 percent – is privately financed. 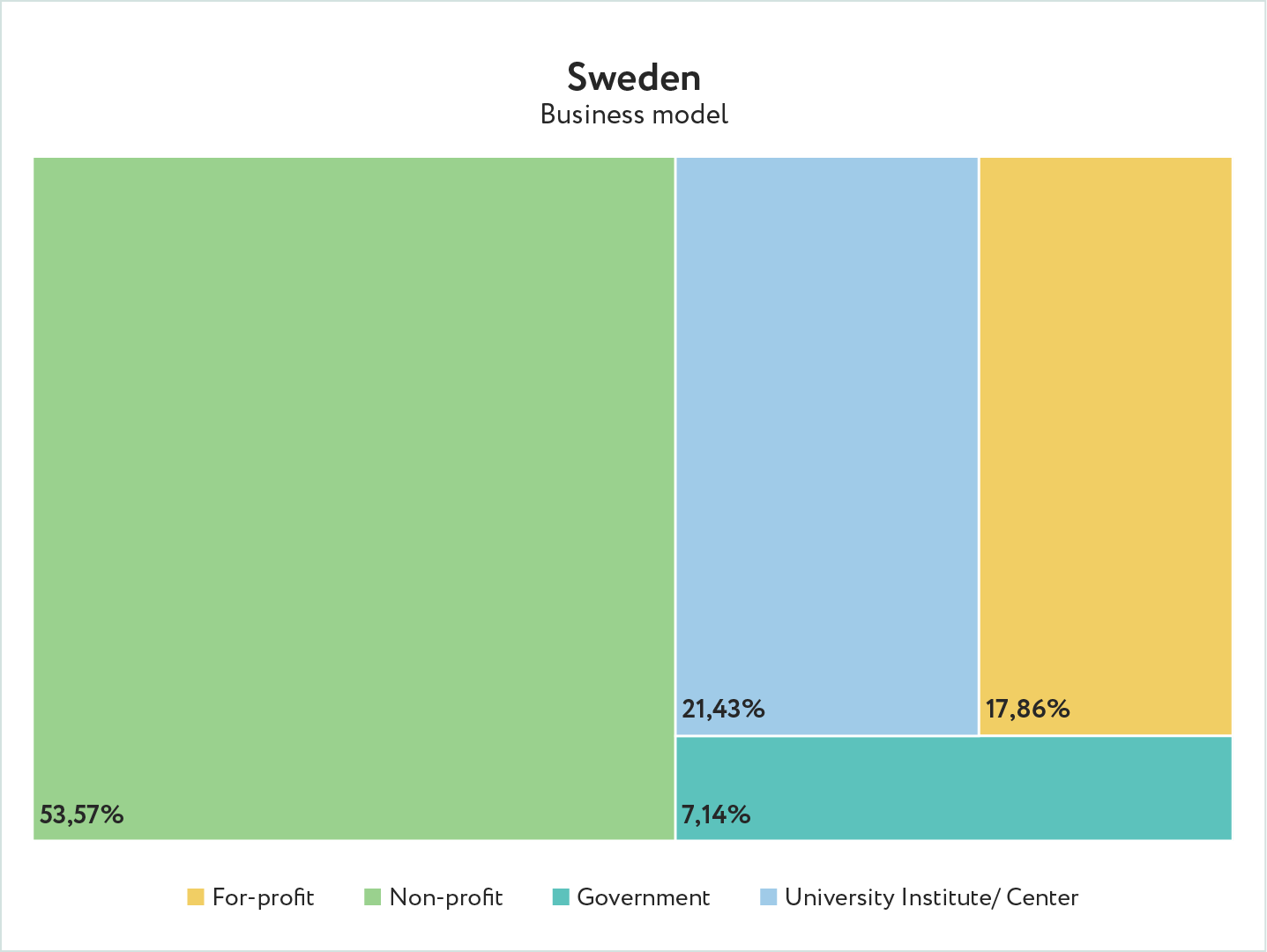 Academic think tanks are heavily dependent on state funds and government-appointed committees, funded out of the state budget and referenced in annual letters of appropriation (Regleringsbrev) where government agencies receive their budget allocations. Some of the independent think tanks, such as SIPRI, were founded on the government’s initiative and regularly receive government funding for their programmes or for specific projects; in the case of SIPRI its main source of income is the Ministry for Foreign Affairs.

SIPRI, and think tanks in the sphere of economic policy, close to the business sector, also receive funding from several international sources, such as the United Nations. Politically and business-orientated think tanks are also funded through membership fees, donations from private companies, government agencies, other organisations, and individuals, and research grants.

As portrayed in the charts, around 50% of think tanks in Sweden are registered as non-profits, followed by those registered as university institutes (21.43%) and those that are for-profit organisations (17.86%). It is no surprise that when it comes to funding, 46.67% of think tanks in Sweden receive funding from the government, a key actor in Swedish research funding. And, as stated before, private foundations also play an important role in the Swedish think tank landscape, with around 30% of the Swedish think tanks in the OTTD indicating that they receive funding from foundations like the AX Foundation, The Jan Wallander and Tom Hedelius Foundation and the Tore Browald Foundation  and the Knut and Alice Wallenberg Foundation. 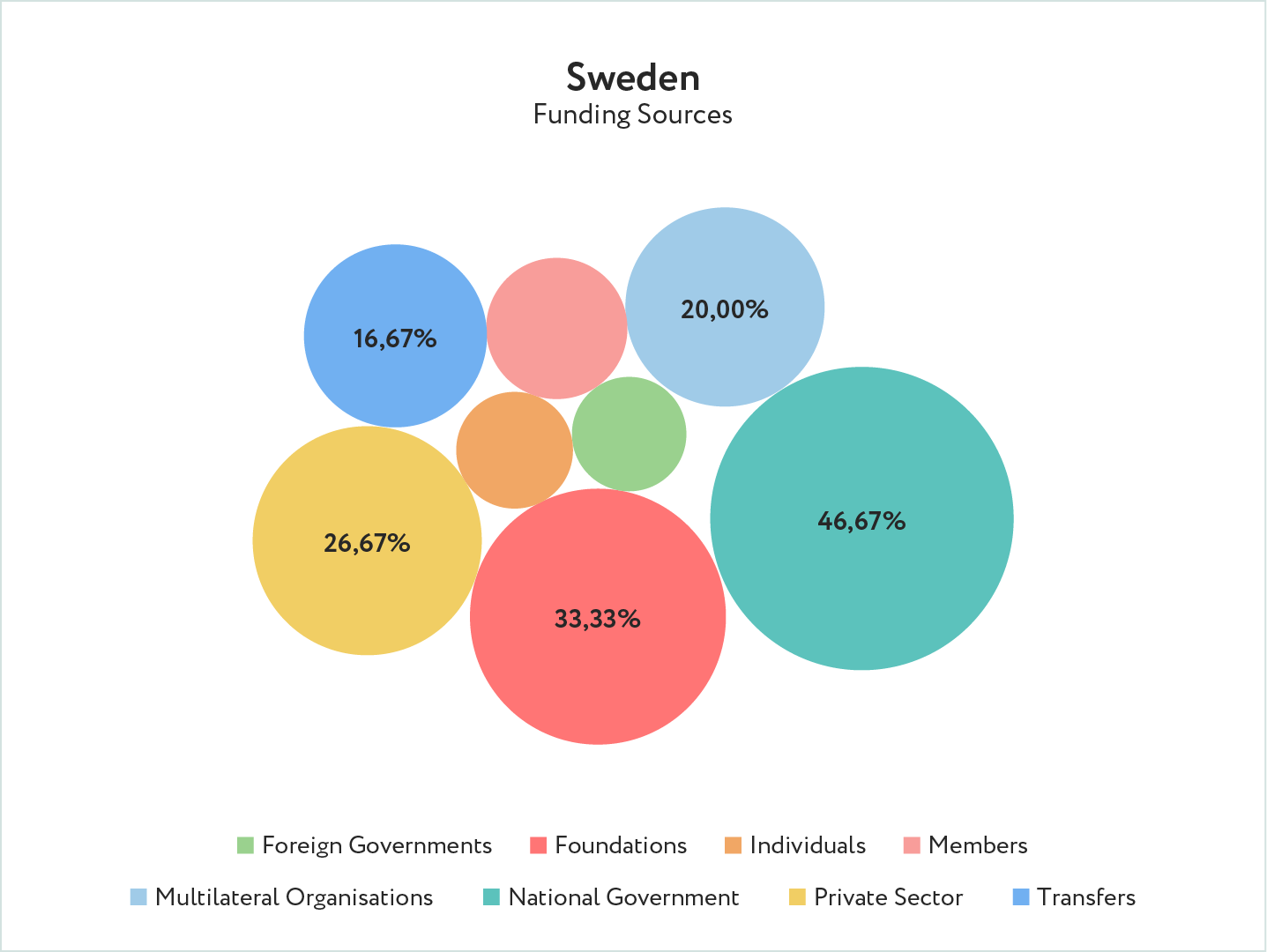 In Sweden, the link between research and influence on policy is unclear because think tanks often cannot make their research relevant for policy decisions and implementation. The Swedish think tank landscape is not as developed in size or policy relevance as in the US, and often think tankers focus their work on researching their areas of expertise rather than linking their findings to policy options. This causes their reports to be seen as overly complicated and not easy for policymakers and the general public to understand.

Most academic think tanks find themselves with this problem. While more political think tanks often have a bigger influence on policymaking, their sphere of influence is limited by their political ideology and alignment with political parties, making their research reports seem not politically neutral rather than balanced research.

This lack of trust in and demand for evidence and influence on policy and public debate might have to do with “Government-appointed committees”. There is a long tradition in the Swedish parliamentary system of the government launching studies (utredningar) to explore a policy area and receive recommendations. These are sometimes bipartisan and consist of committees where all or most parties are represented, and where a secretary and secretariat are appointed to conduct the work. Other times these studies are led by one-person research teams whose independence from political parties enables the government to achieve consensus.

This tradition of seeking independent evidence to support policy development is very supported by public opinion, and there is high confidence in the quality of such work. Because of this, the research carried out by think tanks is often seen as not as relevant (or objective) as the work carried out by government-appointed committees. Thus it is difficult for think tanks to influence the policy debate.

Previous
Part 10 of  Think Tank Landscape Scan 2022
Next
About the authors: