Recent macroeconomic issues dominated by Brexit, COVID-19 and climate change have diverted other big policy response processes. All other policy issues have been reframed to demonstrate their relevance within a Brexit, pandemic, climate change era.  The UK government is focused on national and regional security issues, net zero and the domestically focused “levelling up” agenda to address regional inequalities, labour market, skill development, etc.

The UK’s two most well-known and well-established international development think tanks are the ODI, now positioning itself as a global affair think tank with satellite offices in Brussels and the Institute for Development Studies at the University of Sussex. Chatham House, the Royal United Services Institution, the International Institute for Strategic Studies and the more recent Centre for European Reform, are other think tanks with strong reputations for their work on foreign policy.  Since the turn of the century, the think tank landscape has proliferated with many new smaller organisations emerging. The current ecosystem is dominated by domestically orientated think tanks focused on issues of national interest.

While one interviewee suggested that this latter type may have less influence on policy, and public opinion than in the past, the think tanks that have the most visibility and influence tend to be those with an ideological position and/or those that clearly communicate their story.

University and NGO think tanks tend to address more micro, technical research questions, and disseminate and communicate research products to achieve impact. The other types of think tanks will be connecting research to the debates happening at a macro level.

In the thematic expert group, several think tanks emerged between 2016 and 2018 specifically to focus on the Europe–Brexit priority. These groups combined a think tank and campaigning/advocacy function and took a position on whether the UK should stay in or get out of the EU. Think tanks of this nature included Open Europe, Economists for Free Trade and Business for Brexit and tended to have a time-bound lifespan related to relevance of their agenda.

In this third affiliated group, a well-known group of university-based think tanks focus on international development and straddle the academia–policy nexus. These include the Institute of Development Studies (IDS) at the University of Sussex, IDEAS at the London School of Economics, and a group of independent think tanks working on similar issues, such as the Overseas Development Institute (ODI) and the London-based satellite office of the Centre for Global Development, headquartered in Washington, DC.

As non-profits, most think tanks need to decide whether to register as a charity organisation; however, 100% political neutrality is a condition to qualify for this status. With many restrictions on registration, some think tanks have chosen to register as corporate entities. See the following visual on the think tank business model. 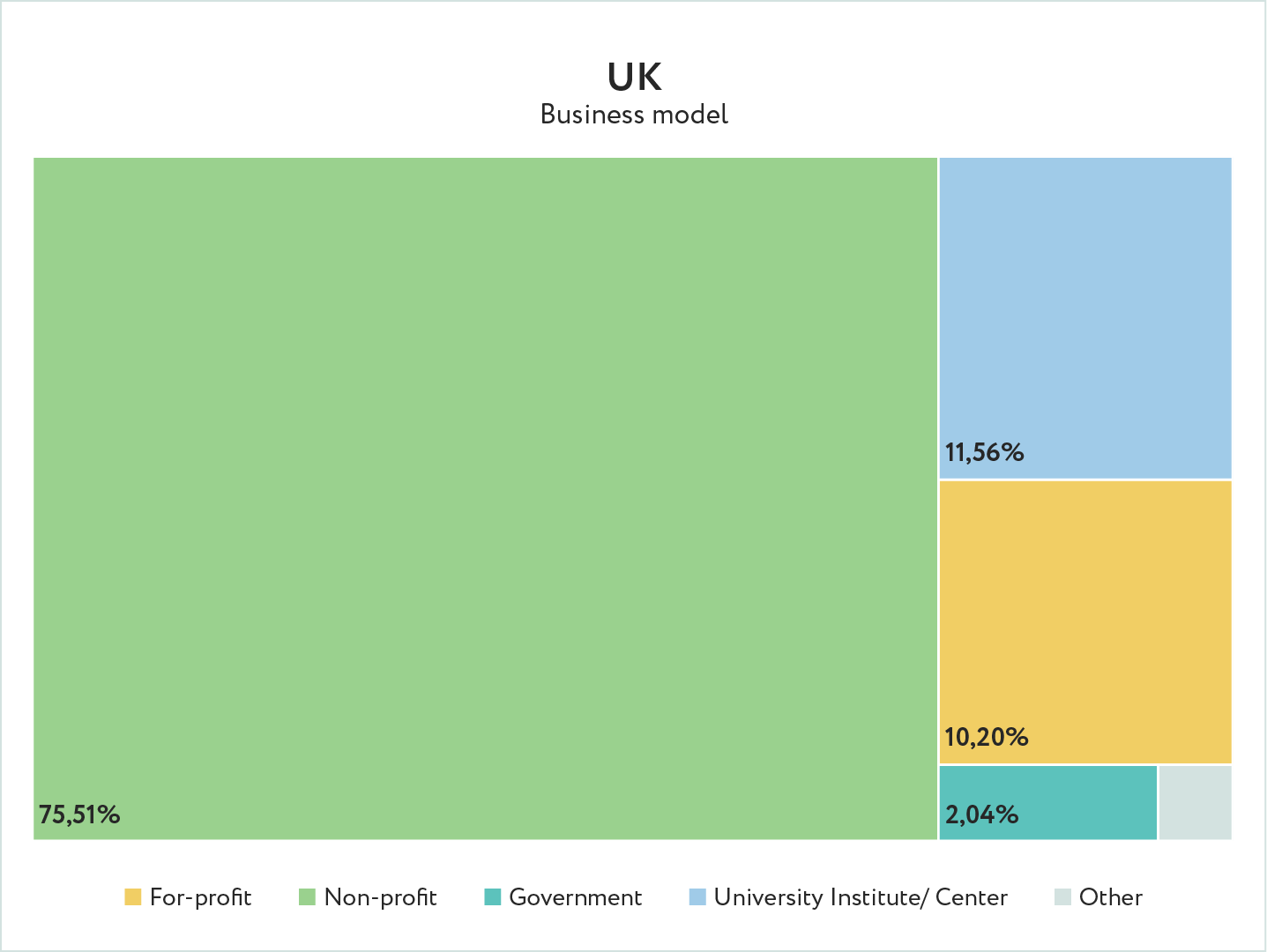 Most think tanks receive minimal state funding and maintain diverse funding sources from multilateral organisations, foundations and endowments. The only exceptions are those working on international development that has historically received significant funding from the Foreign, Commonwealth and Development Office (FCDO) (formerly DFID).

Many derive their basic funding from private individuals’ and firms’ membership fees and publications’ revenue. At the same time, the remainder of their activities benefits from project funding and donations from companies, international organisations and foreign governments.

Foreign affairs and aid-focused think tanks in the UK do not see themselves as targeting the UK public alone. Their membership tends to be international, and some maintain offices abroad. They organise annual conferences and international meetings, many of which are public. Some such as Chatham House and the ODI have set up international education and training centres for “young leaders”. This wide range of activities generates diverse funding sources, with their readily accessible communication in the international media and impressive use of social media, which explains their considerable international reach in terms of funding sources. Following is a visualisation that illustrates the diversity in funding sources based on OTTD data. 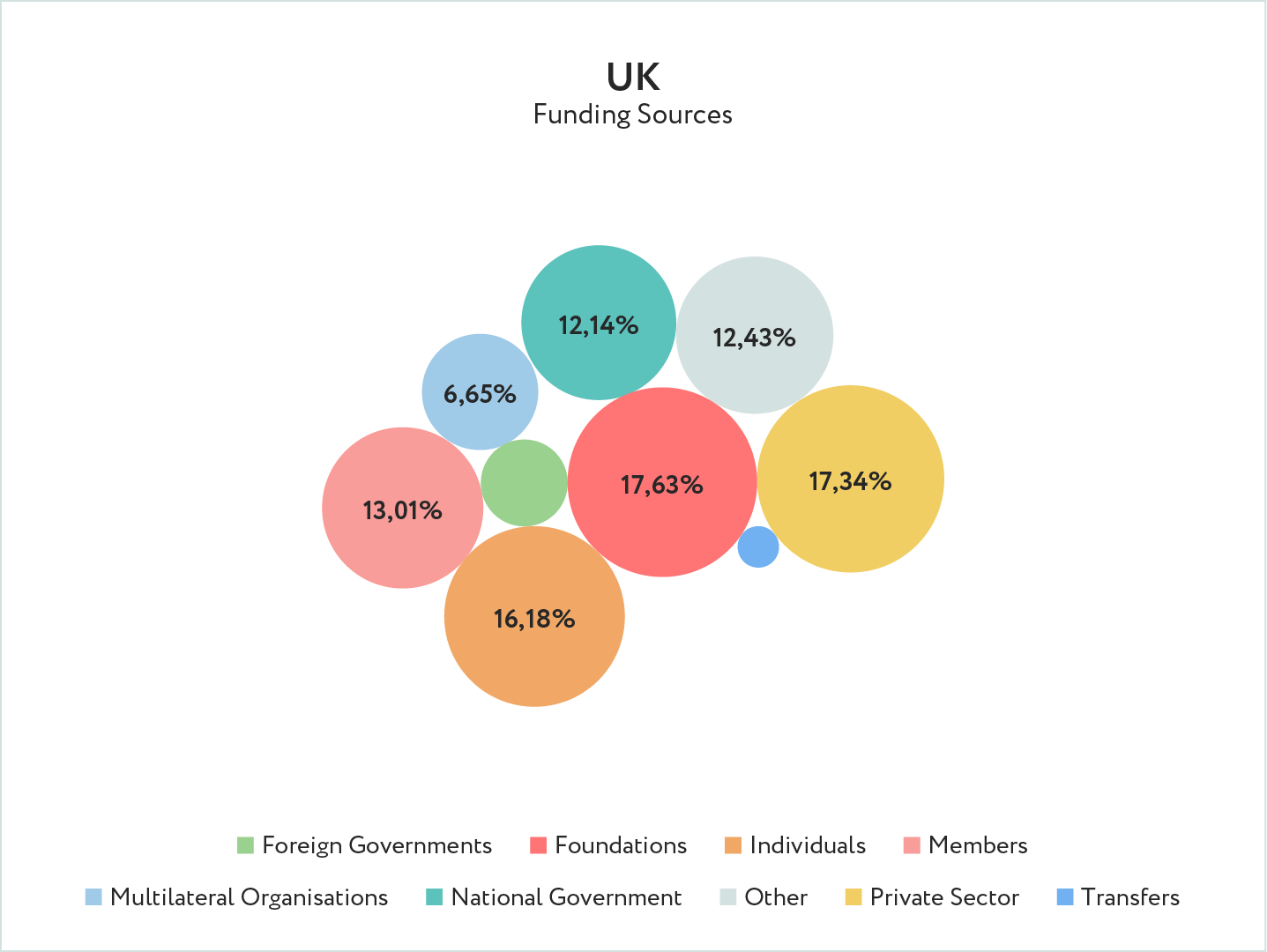 Evidence-informed policymaking made considerable headway during the Tony Blair years, despite being seen by many as political posturing.  The general perception is that the Boris Johnson administration does not rely on evidence as much as his predecessors.

Notwithstanding recent stagnation in demand for evidence and the questions over whose evidence counts, the demand and use of evidence are consistently ingrained within the civil service.

There is a tradition of informal networking between policy shops within the civil service with think tanks; however, it is hard to determine the influence of these interactions.  Insights from interviewees suggest that members of parliament from the left regularly meet with think tanks that share their values, and interviewees perceive that these informal networks are more prevalent on the left than on the right.

Think tanks play an expert advisory role by working with government officials with parliamentary committees of the House of Commons or the European Parliament, and representatives from the business community and civil society.

Conservative, centre-right think tanks such as the IEA, Centre for Policy Studies and Policy Exchange have been highly effective at getting policy recommendations written into government reports and influencing policy decisions. As one interviewee stated: “Policy Exchange is probably the one think tank that works at the intersection of economics, politics, foreign policy, and development and has a high degree of access and receptiveness within the Conservative Party. If you’re not talking to the guys at Policy Exchange, you’re not part of the conversation.” Another interviewee suggested that although Policy Exchange has a history of strong influence, Onward and Reform have taken up some of that space in recent years and have established pathways to influence the current government. According to some interviewees, the same is true of the IPPR among the Labour Party, with more players, such as the Resolution Foundation, gaining traction with Labour.

There is a well-established revolving door culture in the UK, albeit more parochial and small scale than in the USA. Looking at the list of current government advisers, one will see many who used to work at one of the big think tanks. The exchange of personnel between ministries and think tanks generally takes place in only one direction: from think tanks to politics.

Occasionally think tank employees are appointed to ministerial advisory boards, and some embark on a political career themselves. For example, a former IEA staffer has moved into an adviser role within the PM’s office and contributed significantly to writing the Conservative Party Manifesto. Similarly, several Centre for Policy Studies experts has moved into government as special advisers.

Aside from an advisory role, think tanks influence public opinion, debate and discourse through their publications and the public events, exchanges and workshops they convene. Furthermore, London think tanks demonstrate that they are taking advantage of the opportunities offered by technology by digitising their archives and making expertise available in the form of videos and podcasts. Online access and user-friendly formats make it possible to reach a broad public and expand the expert community.

Previous
Part 12 of  Think Tank Landscape Scan 2022
About the authors: