By  Enrique Mendizabal
Previous
Part of  News and Announcements
Next

Once again, thinktankers from 10 different organisations and 9 countries came together, this time, in Jakarta, Indonesia. The objectives of this second meeting of The Exchange are:

The first day was an opportunity to reacquaint ourselves with each other as well as to introduce new participants.

The outline for the first day of the workshop was as follows:

After some welcome remarks from Article 33’s director, Chitra Hariyadi, and Ben Hillman from the Knowledge Sector Initiative, we provided a quick update of progress since the last meeting in Lima:

This included a reference to the setting up of the teams (on Performance and Communications), some changes in among the participants (both Article 33 and IRE, in Indonesia, nominated new participants to The Exchange), developing the proposals, the reviews by a panel of experts and, finally, the organisation of this event. 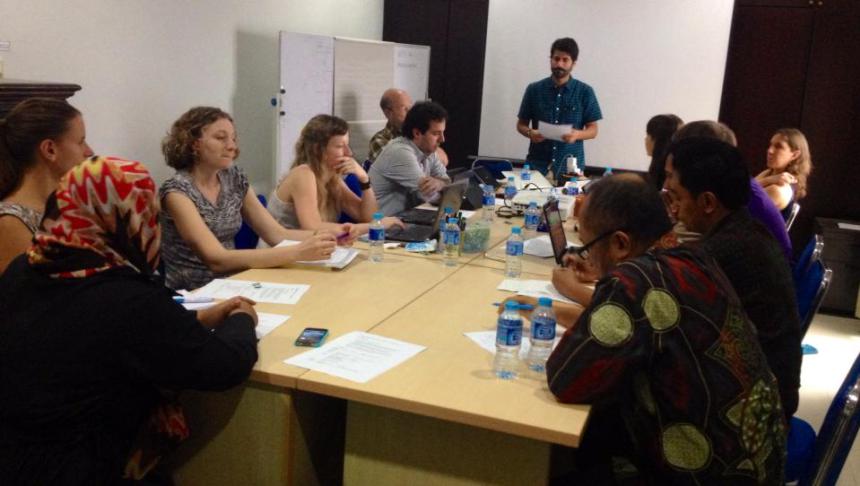 To help remind ourselves of the think tanks in The Exchange and to ensure that we continue to learn about each other, the participants then proceded to some interesting information about their organisations.

The were asked to complete the sentence: To understand our think tank you must first understand…

The day finished with the participant’s going over their plans for the week. We asked them to outline their objectives for the workshop to ensure that they would be able to focus their attention:

As a reminder of the efforts made by the participants we asked them to answer the question: so how long did it take you to get here? We turned it into a map:

Scientific advisory systems are an aspect of evidence-informed policymaking that isn’t talked about much. They’re largely absent from research uptake and knowledge...

Project brief OTT provides communications support for Socialising the Call to Action on Scaling Impact, in particular providing input and feedback on the development of...

Support for the Latin American Evidence Week from UNICEF

Project brief The objective of this consultancy is the conceptual development and production of a series of events for the "Semana de la Evidencia 2021" (Evidence Week...

Project brief The project involves: Undertaking a mapping of the policy ecosystem and identify relevant think tanks in 15 countries of focus for the BMGF's Europe,...