What does it do?

When developing the idea for Second Opinions, Social Science Works sought to alleviate a common problem that decision makers face in a world that has become increasingly research-based: namely, reducing ambiguity in the quality and validity of research. In a world dominated by interest groups, research presented to those in government and civil society often suffers from biases, omitted assumptions, or incomplete or faulty research design. Perhaps even more concerning is just how often this type of research is accepted by decision makers and then translated into actual policy, which can result in far reaching and troubling consequences.

By offering a neutral, scientific evaluation of existing research, Social Science Works developed a Second Opinion service in an attempt to improve the credibility of policymakers and members of civil society who seek to use research when justifying policy initiatives.

The service works as follows:

What’s the result? The Traffic-Light System 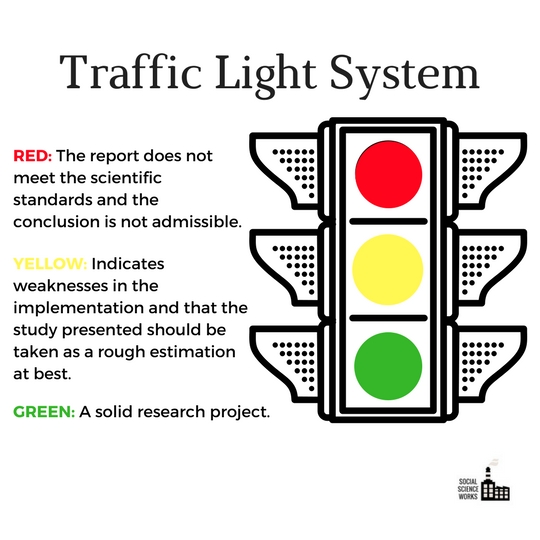 The research is evaluated against a set of criteria, and ultimately receives a final score translating into a color-numeric “Traffic Light” grade with a corresponding overall recommendation regarding the permissibility of the research in decision making. The results of the final evaluation range from justifiable and permissible – a “Green Light” – to completely inadmissible with serious problems in the research – a “Red Light.” Each thematic area is graded with this system (a more detailed version of the methodology is available by request).

If you are interested in the service, please get in touch via: [email protected]

Social Science Works is an international think tank based in Potsdam, Germany. Founded in 2016 by scholars from Humboldt University in Berlin, it focuses on making social science useful for modern democracies. It seeks to provide policymakers with the tools to use social science to make better informed decisions.