Force Field Analysis: A cheaper and more useful alternative to ROI for a think tank

Last week I attended a meeting of members of the Latin American Initiative for Public Policy Research (ILAIPP) or Iniciativa Latinoamericana de Investigación para las Políticas Públicas, supported by the Think Tank Initiative and hosted at GRADE, in Lima. One of the inputs to the event was a presentation of a pilot to test the usefulness of the Return on Investment method for evaluating the impact of think tanks. I tried this before for a project for DFID in relation to its efforts to influence health policy in developing countries and in multilateral agencies. It was an interesting attempt but it did not yield conclusive results nor was it at all useful to know what worked and why. If anything, any lessons learned from the exercise came from the qualitative aspects of the study.

ROIs, but even better, Social ROIs, can be useful if:

But when it comes to research and the impact (terrible word, I know) it has on policy (too broad, I know) none of these conditions are possible:

There are other reasons why ROIs are not the right tool for think tanks, including:

There is already a literature on the rates of return to research which concludes, among other things that:

the main challenges facing the measurement of the rate of return to research:

Are ROI’s useful for think tanks at all? Yes. Think tanks can use ROIs to assess policy options and recommend the best (or more desirable ones) to their policy audiences. In other words, ROIs (and other such methods) can be useful research methods on which to base their arguments and advice. So, by all means, do look into them but don’t use them for what they are not useful.

An alternative to the ROI: the Force Field Analysis (although common sense will do, too)

Is there a tool (I am not a fan of tools but…) that could do some of the things that ROIs’ are supposed to do? Well, Force Field Analysis (FFA) is a tool that can, unlike a Return on Investment (ROI) evaluation, be done ex-ante (to help decide), be used for monitoring (to learn and adapt), and offer a sense of whether all that was done was done properly (to evaluate).

It won’t quantify (in any scientific way) the level of contribution to a change (not will it attempt to) but it can offer some sense of it. It can certainly help to tell a reliable and nuanced story.

The FFA described below was improved by Ben Ramalingam and was later adapted over a series of workshops with researchers, advocates, policymakers, communicators and others. The (adapted) text and diagrams below are taken from a How to Note on Policy Influence that I drafted for DFID in 2010 -so I apologise for any self-referencing:

Using a force field analysis can help identify and understand the forces for and against a desired change in an actor, and which of those forces a think tank can have the biggest influence on. It is not be necessary to conduct a FFA for every policy objective, though, and ideally organisations should learn to prioritise those objectives and actors which are the most important for their mission and where they are unsure of their influencing capacity.

In order to use a FFA effectively, the think tank needs, above all, a clear desired change. The more specific the change the better -and the change ought to be linked to a particular actor (a person, a team, an organisation) with decision-making capacity.

If a flip-chart is used then: 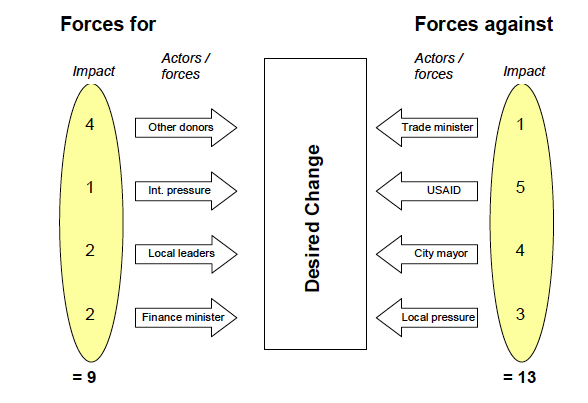 Here is where Ben introduced a new dimension. The steps so far have given us a sense of the factors that may cause a change to happen or not. It also gives an estimate of the degree of difficulty of that change. Anyone doing a FFA should expect the balance to be negative or else they should consider that they have chosen to target something that was going to happen anyway.

The FFA as it was originally developed did not provide a sense of what to do next. The next steps can help in this respect: 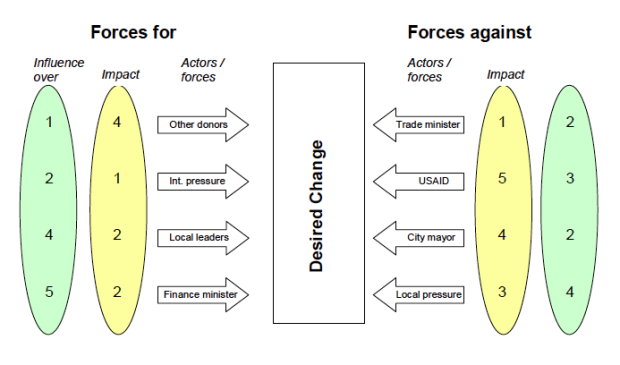 Completing a FFA can help an organisation or team decide what actions would be required to influence others to achieve their objective and whether these actions merit the necessary resources -or the resources they have. They may find that it will require a disproportionate amount of effort to change an organisation’s or group’s behaviour, even if they had been previously prioritised; alternatively, they may find that they have a lot of influence over a person, organisation or group (or process) who they had previously discounted as being immovable or relevant.

If after conducting a FFA the think tanks decide that it is unlikely that they could influence a desired change in an organisation or group, it can be helpful to consider that:

Ideally, a think tank would do several FFAs: for different objectives. By comparing them it can make a decision as to which objective(s) deserve(s) its efforts. It may very well choose the hardest one but there will be a record of the others and of the opportunities that they offered the think tank. This decision can be evaluated in the future.

Using FFA for monitoring and evaluation

All of theses changes demand analysis to decide why they happened. It would be a mistake to assume that they changed because of the actions of the think tank simple because the think tank sought to change them. And this should be clear from the fact that think tank is likely to be focusing its attention on only a small portion of the forces affecting the desired change.

The analysis in turn should provide the think tank with additional options and choices which can be evaluated later on.

FFA can also be used to evaluate the intervention. It should be possible to:

But it won’t provide a number nor should be used to attempt to attribute a change or impact to a single actor or intervention.