[The summary of this session was written by Erika Perez-Leon, Director of Communications at On Think Tanks.]

In the age of social media, facts are in crisis. But policy-making is not just about facts — it is also about how they interact with the political environment. This session, run by Aidan Muller and Katy Murray from Cast From Clay, looks beyond fact-based communications. It defines the terms of engagement, and explores what a viable model of storytelling might look like for think tanks. Aidan and Katy are joined by Lizzie Harvey, who talks about some of the storytelling work she has done at Theos think tank.

This session builds on these two slides that Cast from Clay presented two years ago, considering more recent conversations around narratives and storytelling. 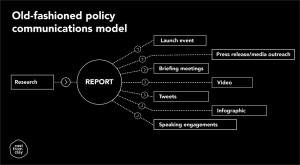 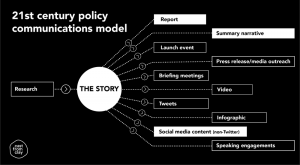 How to start to define a framework for storytelling?

Is this outside the remit of think tanks? Cast from Clay asked 100 members of the UK parliament what they thought the role of a think tank should be today:

Aidan then presented a framework for storytelling for think tanks.

Lizzie Harvey, from Theos think tank, talked about their work around enriching the conversation and belief in society, believing there is untapped wisdom in faith traditions that can speak into some of the big questions about how we live well today.

The prevailing narrative around faith and believe is not always a positive one, so this requires a certain level of environmental storytelling.

Lizzie then shared the experience of Theos think tank in growing their comms team and the balance between researchers and communicators.

Why think tanks should employ fewer researchers, by Louise Ball

The Perils of Perception: Why We’re Wrong About Nearly Everything, by Bobby Duffy

Don’t Think of an Elephant! Know Your Values and Frame the Debate: The Essential Guide for Progressives, by George Lakoff

Previous
Part 13 of  OTT Conference 2020: the 3rd online event
Next
About the authors: