Social media visibility: does it have anything to do with size?

A study by Horst Joepen from Searchmetrics has calculated a ‘social media visibility’ score for 20 Russell Group universities. It includes metrics for their presence on Facebook, Twitter, Linked-in, Google+ and other media. The findings are very interesting. They show that size does not really matter than much. In fact, larger universities evidence a difficulty in getting off the ground regarding social media. Or better yet, smaller universities may have an advantage. 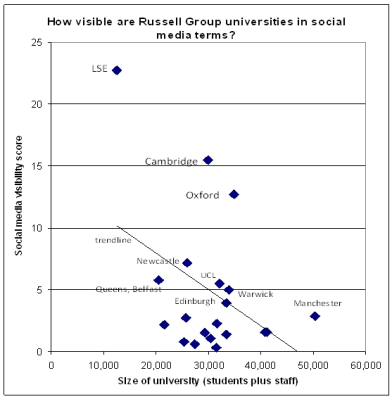 The graph above shows a trend that appear counterintuitive. Smaller universities have a higher social media visibility than the larger ones. This is not necessarily about quality; the Russell Group, after all, brings together the UK’s leading universities. It is mostly about a strategic choice to develop and implement digital strategies. Manchester and Warwick are well-known but do not appear to have an important media presence. Cambridge and Oxford, on the other hand, have done a better job at striking a balance. LSE, on the other hand, the smallest in terms of size is by far the most visible online. What is LSE doing?

For one it has developed interesting digital vehicles such as its LSE Politics and Policies blog and the Impact of Social Sciences blog. It has also tackled spaces such as twitter with multiple accounts: Have a look, for example, at the LSE in social media page. Here are some examples of tools or mechanisms that may be relevant for think tanks:

To promote its own research and expertise:

To keep in touch with alumni and its main audiences:

In other words, the approach taken by LSE is clearly all-embracing of the opportunities that social media offer. It is not easy to dismiss this effort as it is driven by the content that is produced by its staff and the organisation as a whole.