Free-riding among funders is more common than you’d expect. It can have a negative effect on the willingness of potential donors to engage with a think tank in the long term. It can also make life very complicated for think tanks and difficult to fulfil their missions.

The call for more adequate funding and pricing has been gaining momentum in the last years. Now, a group of US funders have come together to call for a new approach to fun thing charities: Pay-What-It Takes Philanthropy. In practice:

Free-riding among funders could be described in the following way:

The problem with this is that to carryout a study (even a desk based study as a literature review) think tanks have to make investments and incur in indirect costs, such as:

Why does this happen?

There are many reasons for this, of course. I have come across a number of explanations which include funders seeking value for money outputs, others are limited by legal or statutory constraints, and others are simply actively trying to take advantage of other funders’ efforts.

Not all do this for the same reasons (based on cases I have witnessed):

What is the problem with this?

When funders do not pay the real costs of policy research (including management, communications and research) they set out a chain of reaction that leads, often, to a never ending vicious-cycle: 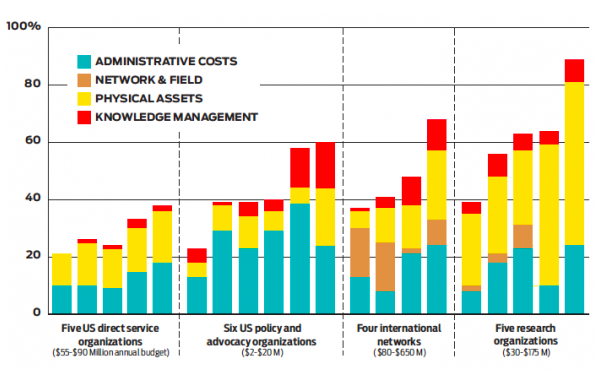 But this has other consequences, too. Project only funding does not lawyer foster productive relationships between  funders and think tanks. Goran Buldioski argues that:

Donors who award core and institutional grants, unlike their peers who underwrite projects, have a fuller picture of the organizations they support.

This may or may not matter in the short term but can explain some less than fair contractual practices that weaken think tanks in many cases.

Underfunding also fuels a a shadow economy in which funders and think tanks see to compensate or make up for what is not being paid over the table and this means that it is imposible to know how much things really cost. eri Eckhart-Queenan, Michael Etzel, and Sridhar Prasad argue that:

funders and grantees purposely obscure financial data and quietly craft end runs around the arbitrary indirect cost spending caps imposed by most foundations. Foundation program officers, for example, often team up with grantees to recategorize underfunded indirect costs as direct costs that the funder covers. Other times, funders approve capacity-building or general operating grants to close the indirect cost gap. As a result, we do not know as a sector what it really costs to achieve impact.

The new approach, spearheaded by the Ford Foundation, William and Flora Hewlett Foundation,  Weingart Foundation, and other who have joined the Real Cost Project initiative, raised a number of challenges for both funders and think tanks (and grantees in general):